It's difficult for people to know what to say when someone loses somebody they love, and even more so when that somebody is their child. I can tell you from experience, that saying almost anything is better than saying nothing. There were only a couple of statements that were awkward - comparing my child to a dog pops into mind - but even then there was tenderness and real sympathy, so it was fine. I would encourage you to remember that and say something as simple as "I wish I knew what to say" because it all helps

Despite the difficulty of the subject, so many people did and said so many lovely things to us when we lost Maggie.  We appreciated - and needed - all of it. Folks worried about us and the boys and took care of us. My favorites, though, were the comments about Maggie, about who she was and what she meant to the speaker. They spoke of her smile, her wicked sense of humor, her love of music, her abilities, her charm and so much more. Knowing she had an impact on people let us know she was going to live on in some form.

The most unusual and perhaps the most amazing comment of all came from a doctor at UCSF, who may actually never have even met Maggie. Clarissa Kripke MD never treated Maggie, but Maggie and I participated in an elective class she teaches at the medical school. this comes to mind now because we recently received certificates of appreciation for our participation, and my friends Jo and Pat who are/have been involved in that program took the time to frame them. 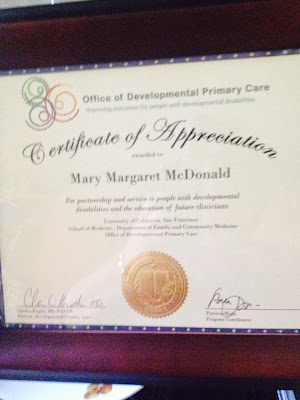 The class is called Caring for Adolescents and Adults with Developmental Disabilities.  Several times we had med students spend a few hours in our house to meet Maggie, hear her story and see how we made it all work. Every one of those students was great, but of course those who choose to take this elective are likely the ones who need it least. They already "get it." and want to understand it better.

As the news of Maggie's sudden passing became known many people posted things on either my or Maggie's facebook page. Dr. Kripke said how sorry she was to learn the news because Maggie was "important faculty at UCSF."

Yeah, I can handle that.

It's probably a good thing Maggie never knew that She would have spent all her time hanging out in the faculty lounge in her graduation gown. 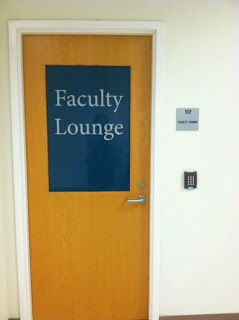 I walked the dog through the park today and thought of Maggie. That's nothing new. I think of her all the time. But this time it was as though she was right there with me, laughing at the dog's antics and charming all the passers by. That's what she did. Laughed and charmed.

I was thinking about all the seemingly unremarkable moments we shared. They certainly don't seem unremarkable now. Those are the things I remember. Laughingly trying to get work done while she nagged me with her talker or listening to Maggie's music in the car with the volume pumped up and her laughing so hard she could hardly breathe. These were just Maggie and mom moments.

Don't get me wrong, she had Dad and Maggie moments and brothers only moments, but I wasn't part of those. I just miss my remarkably unremarkable time with her. 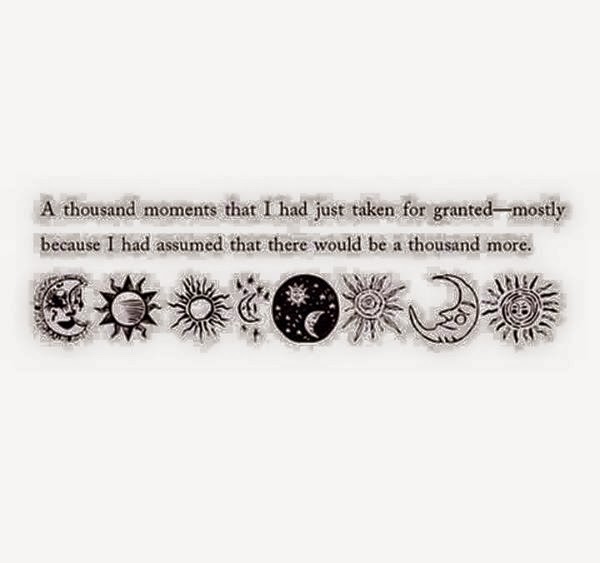 Email ThisBlogThis!Share to TwitterShare to FacebookShare to Pinterest
Labels: a thousand moments, grief, Maggie and me

Hope everyone had a nice Mother's Day.  It is a bittersweet day for me. More sweet this year because I was busy from dawn til dusk.  We started the day hosting a breakfast for 14 at our house. My mom, two sisters, a brother, their spouses and available kids came over. It was Plan B. We were going to head up to the wine country for a picnic, but I backed out when I learned that Eddie was coming home for Mother's Day and my gift from him was tickets to the Giants games.

I told my siblings I would host the breakfast, but they had to be gone by noon so we could go to the game and they were not allowed to put me in the position of throwing my mother out on the streets on Mothers Day.  That's just bad karma all the way around. They took care of me. 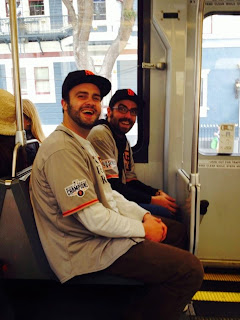 We really had fun on our adventure to the game. We took the train and ran into a few delays, so we didn't sit down until the bottom of the first. No problem. Plenty of baseball left.

When Steve and I go to the game, we watch intently, we clap, we cheer, we groan all at the right times. But we really blend in. We are average fans who don't stand out.

It's different with my boys. They are superfans who never blend in. Tim kept the entire section entertained (or annoyed, but mostly entertained) with his constant banter. He took aim at the opposing pitchers warming up in the bullpen and it was really quite hilarious. It's definitely rated PG; he does not swear or say anything mean, but he razzes them unmercifully at the top of his lungs.  Eddie joined in and we spent a couple of hours laughing pretty hard. When the relief pitchers gave the game away to the Giants, we had to give the boys credit for rattling them. Fans were giving them high fives them on the way out, so I guess/hope it was funny to others as well.

We stopped for a beer after the game to let the crowds on the train die down. As we sat on the deck at the Hi Dive, we could hear the music inside. I swear every single song was on the Maggie Mix from 2012, Katy Perry, Bruno Mars, Call me Maybe and more.  I finally commented on it, and each of the boys had already noticed.  Another of Maggie's songs would start and we would just look at each other with a wan smile. It was good, though. It was like a message that Maggie was right there with us. Oh man she would have really laughed at Tim and Eddie's antics.


Keeping so busy was great. I was a bit melancholy here and there during the day, but generally busy and laughing. By the time we got home I was too tired to care about anything and ate some Pizza and went to bed. 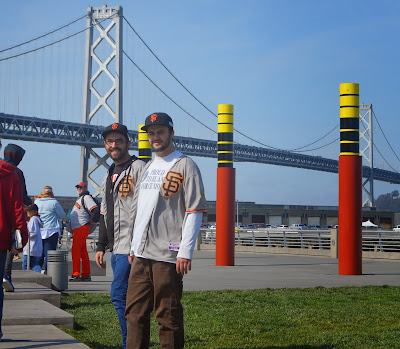 And if you are wondering, Tim's shirt declares I'm proud to be an Air Force Mom. That's his mother's day shirt. The people behind were deferentially asking me if I was an Air Force mom and I had to say no.  The deference disappeared rather quickly.

Blast from the Past

I found this picture and decided I needed to scan it. There are really very few of Maggie and me alone, even though 75% of the time, that's how it was - just me and her.

This was taken at an early morning soccer game for on of the boys. When Maggie was little and I could carry her, we went to all the games. That became more difficult as she got older; wheelchairs and fields are not a good combination. She always had fun on these outings, though her favorite sporting event was the basketball games. Those were inside, lasted less than an hour and had all the great noises. Soccer was second and baseball a distant third. The baseball games were too long and too cold for her.

I'm guessing this was 1996 or 1997. As I said on facebook, it is far to late for the Dorothy Hamill haircut I'm sporting. 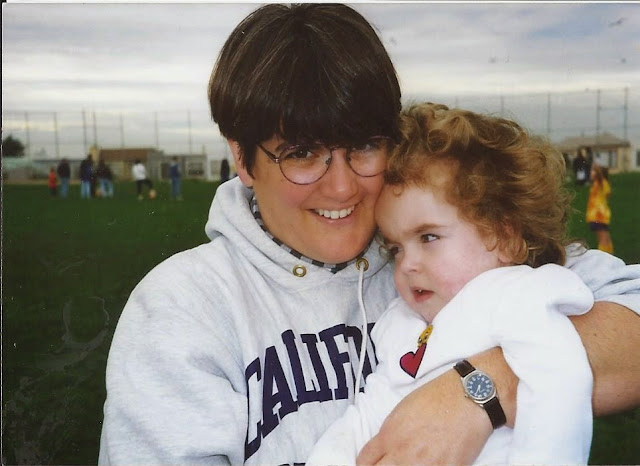 And just for you youngsters. Here's Dorothy Hamill, gold medalist at the 1976 Winter Olympics
with he haircut that everyone copied. But not for 20 years 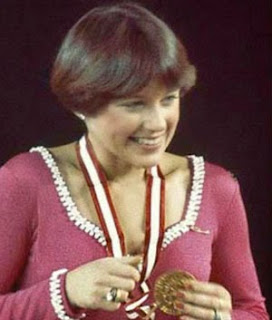 And no. I cannot skate.

As time goes by I find myself writing less and less and feeling worse and worse. I think I need to write more to feel better. Not sure whether that's good news or bad or all of you...

I am looking for a meaningful way to spend my days. Though it would have been easier just to stay there, I left my job at UCSF because I have this need to do more than that job was allowing me to do. It's time for a challenge. I have this energy and knowledge and experience that I can put to good use, somewhere.  Now I just need to figure out where that is. 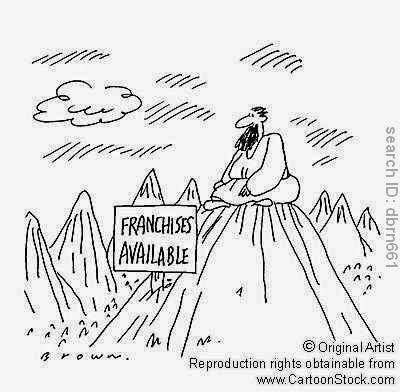 Of course, I feel like I should be standing on a mountaintop dispensing wisdom, and if I could figure out how to turn that into a paying gig, I would do it. Perhaps there is a website called "weneedgurus.org" that has the mountains and provides benefits, but I haven't come across it. I know something will revel itself in time. Patience is the key; but it is a quality I have never had in any great measure.

Really though, what makes me think I have so much to offer? I am past middle age, I have a checkerboard resume that doesn't include the twenty years of experience that really shaped me. How do I convey that the experiences I had and the things I learned raising Maggie are the very things that make me a valuable asset to a company. The workplace doesn't appreciate motherhood in its purest form and could not possibly understand the version I had. So what makes me the guru?  Swagger? Confidence? Delusion?

My friend Elizabeth posted this opinion piece from David Brooks of the New York Times yesterday. I suppose it's just a literary version of "What doesn't kill you makes you stronger." but it really spoke to me. The perspective I acquired because of raising and losing -- especially losing - Maggie  is the very thing that makes me think I am that guru.  It's worth a read.