For all the children

The other day I had the opportunity to attend a Ceremony of Remembrance at UCSF Benioff Children's Hospital. It's an annual event but it was my first time attending. The event is a memorial service to honor the patients of the children's hospital who passed away.

I was invited in 2014, right after Maggie passed away but there was no way I could handle it then. I was invited last year and never really considered attending. This may sound strange coming from me, who writes a blog and puts parts of my life online for anyone to read, but I do not like public or group sharing of grief. It's too personal. It's too much.

This year the invite came and the service was scheduled for 5:30 on Thursday afternoon.  I facilitate a group for parents whose kids are in the hospital on Thursday afternoons from 4-5. It was extremely convenient. I was already going to be there anyway and I greatly admire many of the people involved in the planning of the service, so I RSVP'd that I would attend. When the reminder about the service arrived I felt like bolting; but I went anyway, and I'm glad I did.

We were encouraged to bring a picture to display on the table outside the event along with photos of many of the other children. I specifically chose the one with Tyre at their pre-prom party. Tyre passed away about a year after Maggie did and then his mom passed away too. I figured there was no one there to remember him, so I did. 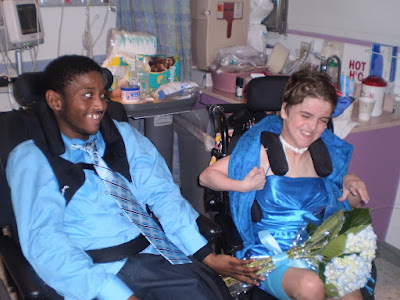 I knew too many parents in there because of the various hats I wear at UCSF. There was Kristi from the Family Advisory council with her family to honor her son Adam who passed away just a year ago. There were two families I came to know in the parent group and Michele, another Family Advisory Counsel member, who spoke at the event about the amazing effect her daughter Cora had in her 8 short months on the planet.

There were readings and stories and songs and it was lovely. There was a slide show of the children being honored. Probably 75% of the children were babies who didn't make it either at birth or shortly after. This ceremony was particularly important for those families. I had so much support when Maggie died at age 19, but society really does not give enough recognition to the amount of grief a family feels for the loss of a newborn or young baby.  I am glad they have this ceremony.

I hugged Kristi as Adam's picture appeared. The man to the left of me started to sob when his son's face appeared. It was gut wrenching. More and more children's faces appeared, many of them so very small. I honestly couldn't remember if I ever actually emailed Maggie's picture for the slide show and worried she would be left out. But that resolved itself when this appeared on the screen.  I'm glad she looked so vibrant and happy. 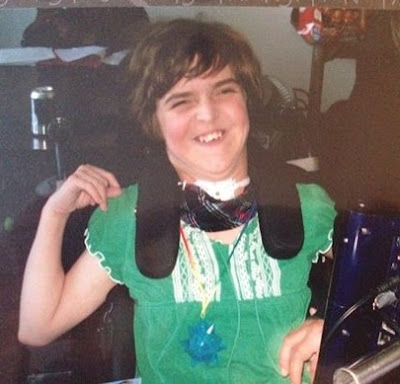 The final part of the ceremony allowed parents to pick a river stone from a basket and place it in a vase filled with water. I did that and loved seeing all the stones together. The parents were invited to say the name of the child they were honoring. I placed my stone in the vase and moved to the microphone. I saw all the people in the room and felt all of the pain and honor and pride and grief at the moment. I choked up and could barely get her name out. I simply said  "Maggie McDonald" and then walked off the stage to receive the rose they were giving out.  My friend and co-worker Lisa, who is also a bereaved mother, gave me a big hug.

The depth of feeling I experienced was exhausting.  Generally this is a rather lonely path. No one really knows what this feels like. Not that day. All those families in that room know exactly what it feels like. And we were all there for each other. I supported them and felt their support of me and realized how much I needed it.

Of course I don't need a service like that to know Maggie is remembered. She is such a part of me that she is always on my mind. Every minute of every day. I miss her and I am proud to honor her. Still, it felt good and powerful to take part in the ceremony.

And, though I wish it weren't so,  I am likewise proud of be among the families walking this path and honor every one of those children from babies to young adults.  We were lucky to have them all no matter how short their lives were.  They left indelible marks on all of us.
Posted by Maggie World at 8:41 AM 4 comments:


The saying "Where there's life there's hope" dates back over 2000 years. It is found in the above quoted play and that playwright died in 159BC. It survives over the centuries because it is generally accepted as true. My realization that I accept that as true came only recently and qute by accident. As is often the case, these truths come at you from left field.

Last month I was speaking on a panel of parents of patients at UCSF Children's Hospital. The audience was the spiritual care department.  They always want to do a better job serving families and went straight to the source, the parents.  We shared our experiences, what worked and what didn't. Because I interacted with Spiritual Care during Maggie's last hospitalization I told them my experience then. It was a very positive one.

Maggie had her incident on Friday morning and died on Saturday night. We knew what was happening. We knew Friday morning in the Emergency Room. We knew she was not going to survive. Neither Steve nor I said it, but we both knew it.

As we sat there in the ER, I saw Benjamin, one of the Spiritual Care team headed toward us. I worked there, so I knew who he was and he didn't need to introduce himself. Of course I also knew why he was coming and I dreaded it.   I willed him to keep his mouth shut because I was afraid he would say aloud what we both intellectually knew to be true. It was crucial to me that it remain unsaid. He came over and stood with us and said nothing. He was just there for us. It was perfect.

I explained that during the panel and said simply as the realization hit me:

And it's true. You hold onto to hope when it's all you have. Even as you have to accept the inevitable, you start to hope for different things. One more smile, a peaceful end or whatever. But Hope is the last thing to leave.

At the very moment I was speaking on this panel Steve was in Seattle dealing with the immediate aftermath of the death of our friend Chris, who took his own life.  We didn't know he was in trouble. We didn't know he had been spiraling for months. None of his friends knew because Chris being the generous and gentle soul that he was didn't want to be a burden to anyone.

I do not have depression. I have certainly dealt with periods of prolonged sadness but it has always been based in life situations, not in my brain chemistry. I do not know what that is like and I'm not going to lie, I am glad I don't. But as I sat there armed with my new realization that hope goes last I also realized that for Chris that wasn't true. He lost hope. And we lost him.

I continue to hope. Some of my hopes are realistic, others are probably not. (My presidential bid is looking unlikely). We all have to adjust our hopes many times every day, but the hope is there. Hold on to it and it will hold on to you.


Hope is the thing with feathers that perches in the soul - and sings the tunes without the words - and never stops at all. Emily Dickinson