The Christmas decor is all put away. Well, mostly. It's all packed up and as soon as the basement dries out from the backed up sewer incident, we will put it away.

Yeah. the year is off to a great start.

I have become something of a Grinch. The Holidays have really become something of a chore. They used to be so fun but not so much anymore. I miss Maggie. There is just a hole in the celebrations and in my heart. There are things about the Holidays that I really enjoy but I have to confess, I really love the day the decorations are all put away for another year and things return to "normal."

Grinchiness notwithstanding, the best part of the holidays is seeing family and friends. I wish we could extend the efforts we make at Christmastime to the rest of the year, and I am going to make that effort this year. I cannot see everyone I want to in the time between Thanksgiving and Christmas, so watch out, I may be coming to visit one random day in April.

We did have a special visitor this year. Emily came from Poland. Emily was Maggie's teacher way
back when. That was Emily's first job as a teacher. Can you imagine? Starting a career with my wise cracking severely disabled and medically fragile child in your class along with other equally involved kids. Emily did great and became a part of the family. She taught Maggie for two years until Maggie moved onto middle school and a couple of years after that, Emily took a job in an international school in Warsaw.

The last time Emily was here was Christmas 2013, just six weeks before Maggie left us.
When she heard about Maggie she wanted to fly here for the service, but I told her not to. The expense would be enormous and she did not need to do that to show us how much she loved Maggie and all of us. We already knew. When she arrived last Wednesday, it was the first time I have seen her since Maggie passed away. As she ran up to me at the airport, I though I was going to lose it.  We hugged for a long time.  There was so much in that hug. I felt like she was literally holding me together.

The visit was short, just two days, but I so appreciate her taking time from her actual family in San Diego to come up and see us. She brought her friend Hannah with her and we did a whirlwind ride around the City seeing the sites. 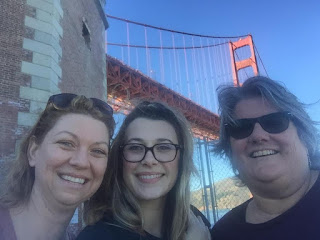 Mostly, though we just talked and walked the dog and ate. At the very last minute I asked two other teachers from those days if they could come by and happily both Sheila and David could come. Sheila, aka "Evil Sheila" (her self given name) taught Maggie for four years before Emily arrived, and David was the speech therapist who was the first to have Maggie tell jokes to figure out how to communicate. Maggie absolutely found her power in joke telling. We sat around my dining room table drinking wine and eating pizza and reminiscing about those years.  I felt like Maggie was right there grinning at the end of the table.  It was excellent and it completed the Holidays.

Emily left and the year ended quietly and we begin a new year.  Despite the sewer and other annoyances around the start of this year, 2017 hold a lot of promise. My son Eddie is getting married this year! Two nieces are also getting married! Another niece is having a baby! My mother is turning 90! There is happiness afoot, and I intend to be a part of it.

I read that many people adopt a word to frame the year in lieu of resolutions. I think that is an excellent idea, though I will do in in addition to the dozens of resolutions I have (most of which will be broken).

My word for this year is LISTEN. I learned in 2016 that I spend far too much time talking to people just like me and then I am surprised something from outside my orbit comes into the mainstream. It is time to get out of the echo chamber and actually LISTEN to what people have to say and try to see the world from other points of view.  That was automatic when I lived in Maggie's world, but with each passing day I get farther from that.

So talk to me, I will LISTEN.