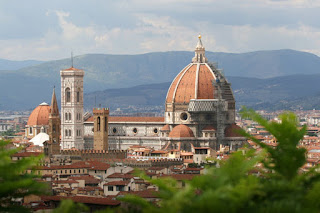 When you wake up Friday morning I will be landing in Florence, Italy.

This is a trip we have planned for a long time.  The airline and hotel reservations have been in place for months.  Because our life is more predictable than it used to be, we didn't bother with trip insurance. Of course we were going to go.

Then, early in the summer, Steve's dad got sick and we weren't sure if the trip was going to happen so all plans were put on hold.

We brought my father in law here to our house and have round the clock caregivers. When he moved in here at the end of July we weren't sure what was going to happen. With the right kind of care, however, he has stabilized and is comfortable.  He lives in Maggie's room so our life has come full circle.

Steve's siblings encouraged us to go on our trip and they are both coming here to manage their dad's care while we are gone.  We couldn't do it without that help and I am very grateful.  I confirmed the reservations and made a few more plans. Somehow, though neither of us really got excited about this because of the situation.  I think neither of us believed we were really going to be able to go. Now were are just 36 hours away from departure and excitement is building.

As we make the final preparations for our trip, I find myself in the familiar position of orchestrating the needs of a medically fragile individual.  Though we never attempted a trip this long when Maggie was with us, the similarities are uncanny. Instead of shift nurses and therapists and bus schedules, it's visiting nurses, caregivers, and social workers.  Supplies are laid in and I will stock the groceries for the first part of the trip. There is also the matter of making sure Steve's siblings know how to use the remote and other household things, and know when to put the garbage out. And, because this is San Francisco, we have to warn them of the car break in problem and plethora of parking tickets.

I think it's all done. I think everything is packed. Passports are ready, boarding passes will be printed. Things will be forgotten and we will manage without them.

Many years ago I went out to dinner with Steve after we completed the last day of the three day bar exam. We had been in a cocoon of studying for two months and the test was finally over. The dinner was supposed to be celebratory, but it was very low key. We were both so exhausted and stressed and relieved we barely spoke during dinner.  As I looked around at other people in the restaurant chatting among themselves I was dumbfounded that they weren't feeling what I was feeling. I said to Steve, "Look at all these people. To them it's just THURSDAY."

Anyone facing a major upheaval in their life eventually comes to the realization that it is not effecting everyone else. It's a necessary first step toward normalization. At first you don't even think about it because you are in the middle of the explosion. Soon after, however, you look around and understand others cannot relate. It's not because they don't care, it's because they don't know. It didn't happen to them. Everything in your life is rocked to its core and people are still waiting for the bus, doing their grocery shopping and heading to work

It's hard to fathom when you life has hit some turbulence, be it good or bad,  that you may be the only one who feels it.  But that's the way it is supposed to work. We need the world to continue, we need people to hit turbulence at different times so that things can go forward. We each move from the center of the explosion to the edges while others are experiencing their own explosions. We become the worker bees while others celebrate or recover depending on the nature of their particular explosion.  That's how life works.

Though the sadder things in life tend to be more dramatic, life altering turbulence isn't necessarily negative.  Falling in love can upend your life without anyone but the two of you feeling a thing. It's your job to absorb that into your life and move forward to give others room.  It is easier to move forward when the upheaval is positive rather than negative. Some things change your life forever - having children certainly does, losing a child does even more. The positive things become part of the fabric of our lives. The negative ones blow a hole in that fabric.

It was 31 years ago that I had that dinner with Steve. Since then I passed that bar exam, married Steve, started a career, bought a house, had and raised three children, dealt with years of medical crises, lost a parent, lost one child, restarted a career, and so much more.  Each of those has been an upheaval of one type or another.  As Jimmy Buffet said, "some of it's magic and some of it's tragic." .

Everyone has to find their own way to continue forward with all that life has dealt them, good or bad, magic or tragic. We don't have to forget. We don't have to pretend we aren't forever changed. We just have to go on however we can. We have to make our way out of the epicenter and toward the edges and become part of life.

I wish I had some sage advice to offer on this subject, but 2.5 years after losing Maggie I am still bumbling along -- faking it til I make it. Admittedly, I haven't moved too far from the explosion, but I am beginning to get some perspective.

Right now I am back at that restaurant finally lifting my head realizing for everyone else it's just been Thursday all along.