Because Halloween, my brother

This was Maggie's Christmas, Birthday and 4th of July all rolled into one. She loved Halloween and all the crazy costumes Steve made for her.

This photo came up on my facebook "Memories" page yesterday and I had to laugh and send it to her brothers. This is a sentence she made on her talker one Halloween past 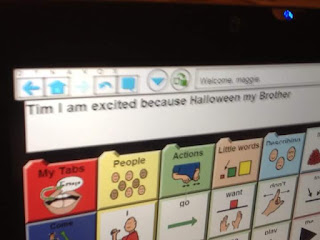 It's been a long month of October anticipating this day and missing her more and more as it approached. But now it's here and all I can think of is her joy. That's a good thing.

Because it's a tradition, I offer you the parade of Maggie's costumes. 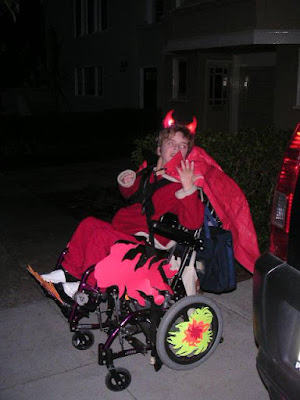 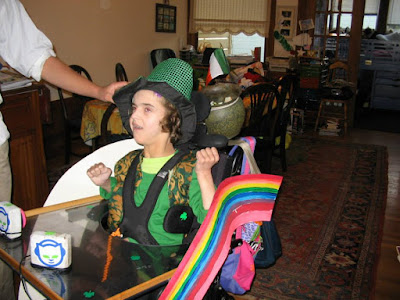 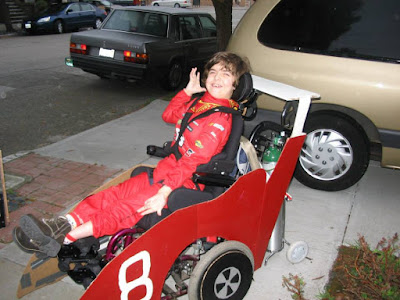 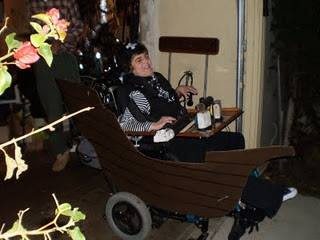 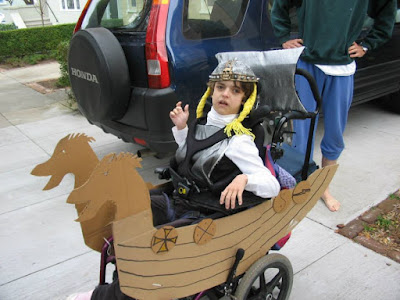 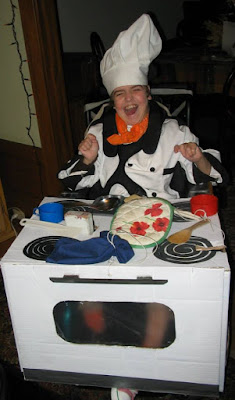 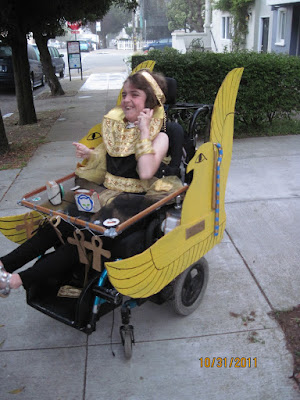 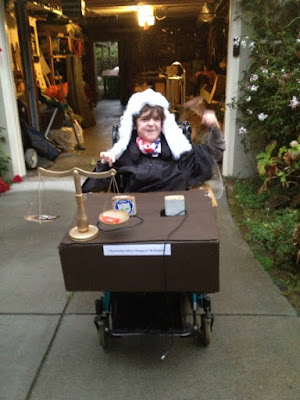 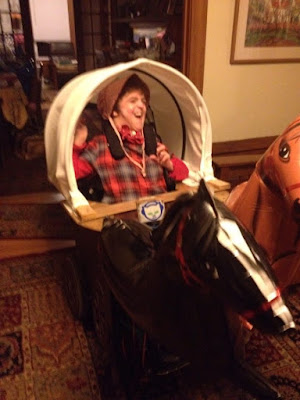 Have a wonderful enjoyable day...

"Because Halloween, my brother"
Posted by Maggie World at 8:34 AM No comments:

My neighbor died. He was a fixture in our neighborhood for over 20 years. His name was Thomas.

Thomas was a very kind man and a very gentle soul. I saw him several times a week for many years - more than I see most neighbors. He always greeted me warmly and wished me well. You couldn't help but smile after an encounter with Thomas.

We all knew him. When my boys Eddie and Tim were little they would point him out if we were passing him in the car shouting, "THERE'S THOMAS!" and wave. He rarely waved back because he wasn't watching passing cars. He lived right where he was. If you saw him while walking, he always had a wave and a kind word. Thomas was homeless and mentally ill. And he was lovely and seemed very happy.

For the last several years, Thomas lived in the trees along Park Presidio and spent his days on Clement Street. When I would see him at 9th and Clement he greeted me like an old friend.  For many years before that he lived in Golden Gate Park off JFK Drive, right by 8th avenue. I know that because at one time he proudly showed me his "home" in the trees.

Thomas was a fixture in the park for many years. Maggie and I were also fixtures in the park and ran into him all the time. He would jump up when he saw her wheelchair coming and spout blessings and wonder and lovely things. He delighted Maggie and he loved Maggie - but then again he loved everyone.  I've seen him many times since Maggie died and could never bring myself to tell him. I didn't want to do anything to make him sad.

We saw him all the time in the Park or at Safeway or just around the neighborhood. I tried to bring him a plate for Thanksgiving one year, but he was nowhere to be found. Tim tried to give him money one time, but Thomas refused it. He never asked for anything. He just spread joy.

Once my sister Ellen and two of her kids came to the City for a jaunt to the Park with Maggie and me. Her son Jeff and Maggie were both 3 or 4 years old and her daughter Leigh was probably 7 or 8. As we approached the area that Thomas frequented, I wanted to give them a heads up. They live in the suburbs and and Thomas was part of the colorful tapestry that makes the City so interesting. It was very different for them and it was entirely possible that he might scare them. As we got closer I spied him on the bench and said, "OK guys, this guy knows Maggie and he is going to say hello. He is a very nice man but he acts different than most people." I barely had the words out of my mouth when Thomas saw us coming, jumped up in his tattered clothing, with his beard and dreadlocks and threw back his head in greeting saying something like. "Oh there she is, my friend, she is blessed and she is beautiful and I love her. Hello Hello Hello my friend."  Maggie gave him a big grin as she always did, and Leigh and Jeff looked wide eyed at the unusual man. They took it in stride, though and we went on about our day.

A few months later Ellen was driving a bunch of Leigh's classmates on a field trip to the Park. As they neared the park she spied a homeless man (not Thomas) walking along and said, "Hey mom, isn't that Auntie Sally's friend?"  Her classmates were starting at her mouths agape wondering who in the world her Aunt Sally was. Thomas gave me street cred with the 3rd graders from Santa Rosa.

I learned of Thomas' passing from Eddie. He sent me the article linked below. Eddie lives 400 miles away now, and has for many years, but this hit him because Thomas was part of our life. I am so glad someone wrote this article and if you have time I encourage you to read the comments. Everyone had almost the same experiences that we did.

The Richmond District might not be the sexiest or most exciting part of San Francisco, but when you read the kind comments, you will see that it is truly the heart of this City.  Here's the link: http://richmondsfblog.com/2016/10/27/thomas-resident-homeless-man-at-funston-clement-passed-away-wednesday-night/

Rest in Peace, Thomas. And thank you for so many years of kindness and love.

Italy was fantastic. The country is beautiful, the people are friendly, the food is wonderful and the sights are unbelievable. We walked and walked and walked - averaging 10-12 miles a day according to the app on my phone. You don't even realize how far you are walking, though, because everything is so captivating.

Our trip started in Florence and then we went to Venice and Rome and the Cinque Terra, finally returning to Florence to fly home. Each place was amazing with its own wonders to offer.


If you are in a position to take a trip to Italy, I highly recommend you do so. I watched people throughout my trip and the Italians are very warm. They greet each other enthusiastically and put up with a lot from the hordes of tourists there.  Sure, they make a lot of money from the tourists, but that doesn't seem like the motivation. They know what they have and they are happy to share it. They are taking the time to live and enjoy their lives and they live in a beautiful place with a rich and important history and culture.

Italy has a lot of churches. I mean an incredible amount of churches. The big famous ones have long long lines to get in. We went into St. Peters Basilica in Rome and into the Duomo in Florence. But in addition we went into many smaller churches, especially in Venice and Rome. Every single one was fantastic and filled with unbelievable art. These smaller churches would be unbelievably grand in the USA, but they were more "average" in Italy.

Suffice it to say I lit a LOT of candles for Maggie in churches all over Italy.

I also threw a coin in the Trevi Fountain for her. 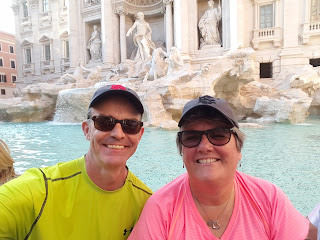 I have to share one strange and wonderful incident. When we were approaching the Colosseum in Rome I saw a young man in a wheelchair. He reminded me very much of Maggie. He was a tourist along with his dad. There was a musician playing and the dad pushed the boy up to the basket and helped him drop a coin in the basket, just as I did many times woth Maggie. That one moment really took my breath away. I miss Maggie every minute of every day, but in that moment I felt her with me.

I wanted to say something, but I didn't. What could I possibly say? I just had to enjoy that moment and miss my daughter and return to the sightseeing with a sad smile. I didn't even tell Steve because he was fixated on some ruin at the moment.  Still, it had a profound effect on me.

A couple of days later we were leaving our hotel, which was on a quiet street just a few blocks from St Peter's Basilica a few miles away from the Colosseum. This was not a big hotel, but a bed and breakfast on the 5th floor of a non-descript building on a non-descript street. As we were leaving a tour bus was letting passengers out. It was the only tour bus I saw near our hotel because we weren't that close to the Square and there was nothing of particular importance near us. I watched as people got off the bus wondering "why here?" Imagine my surprise when I see the same man carry the same young boy off the bus and someone follow with his wheelchair. I felt like it was a sign. Not sure what the sign meant, but I felt Maggie's presence very strongly.

I guess that was to be expected. I always bring her with me. It has become my habit to pack one of Maggie's scarves whenever I travel. It's a little tangible reminder that she is with me. This is not something I talk about, but it has become part of my routine. When we arrived in Florence and started arranging our things, I noticed a scarf in Steve's bag too. 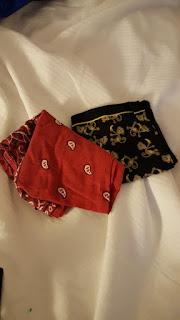 He does the exact same thing and we never discussed it.  So she was with us on the whole trip.

________________-
Bonus section  I wasn't kidding about the food. here are just a few examples. I don't even have any main courses in there because I always ate it before I remembered to take a photo. 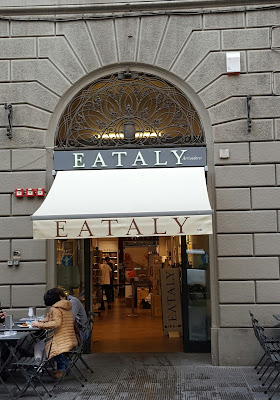 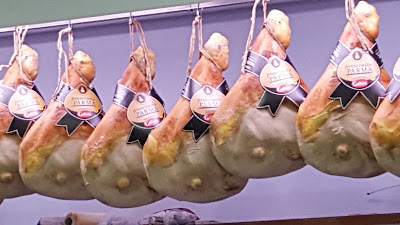 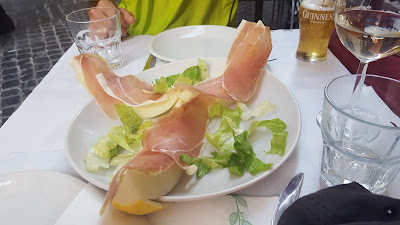 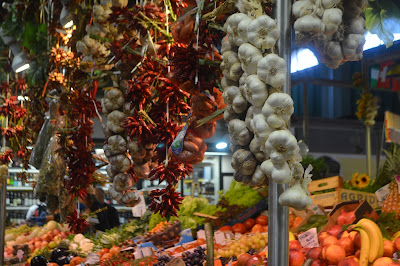 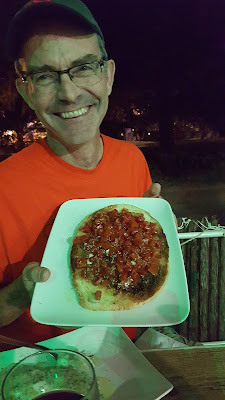 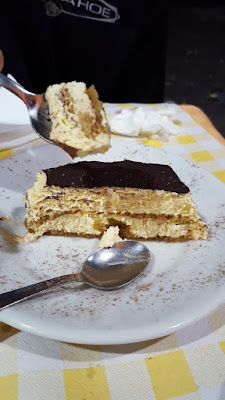 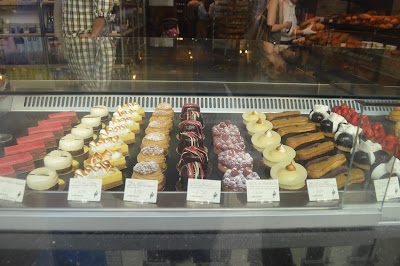 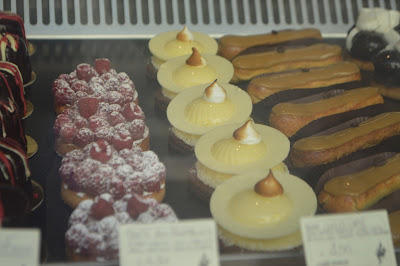