Maggie used to bring home the best gifts for me. They made them in school and she would be so so proud to give it to me.

This is one of my favorites. It's so retro.  I remember these in lots of houses when I was a kid. 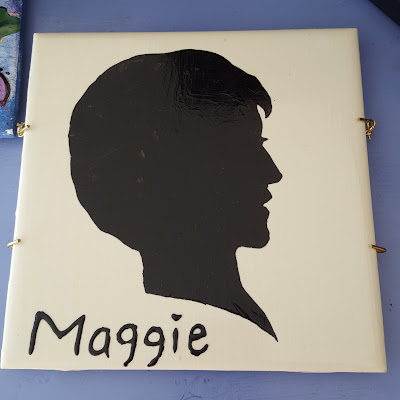 I haven't even hung it up yet because I can decide where it should go. Once I get my office the way I want it, it will go in there. Seems fitting since my office is Maggie's room. There's good energy in there.

Back to School week memories

It's the first week of school in San Francisco and many other places. I've been seeing back to school photos all over the internet. Oh how I loved this week when Maggie was here.

Summer vacation was hard because there was just NOTHING for Maggie to do except hang out with her old mom. Don't get me wrong, we had a ton of fun together. But it wasn't like school.  School was her everything -- education, entertainment, recreation and social life. She was back with her friends. We would get everything ready on that first day of school and wait outside for the bus, which was always late on Day 1. When Maggie saw Nurse Janice coming down the street she would get so excited, I thought one or more of her wheel chair straps would bust.

And I'm not going to lie. It was a good day for me too. I posted an annual "Dance of Joy" post when Maggie returned to school and we had some semblance of a schedule again.

Just missing my girl this first week of school and every week. I'm happy to remember her so happy. Here she is on the first day of school in 2012 waiting to go down the elevator to get on the bus and and 2013 checking out her new bus driver 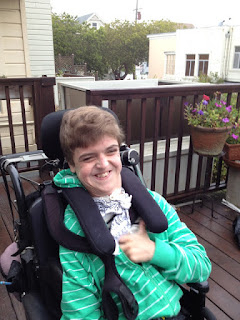 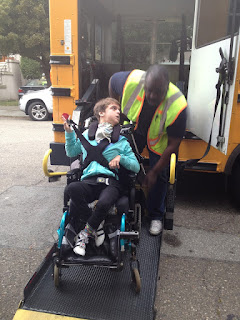 You will have to settle for a mental image of me doing the Dance of Joy.

No dance today, just small sad smiles as I remember.

Email ThisBlogThis!Share to TwitterShare to FacebookShare to Pinterest
Labels: back to school, memories

Sometimes gratitude is already in the house before you even hear the knock on the door. It comes in through the back door or an open window and settles right in. Sometimes it's there all along and it just waits to be recognized. Periodically I recognize it and have to

We had a great weekend because of some unanticipated free time, which has been sorely lacking the past few months. A friend invited us to spend the night at their vacation place in Santa Cruz and we didn't ask questions, just threw some stuff in the car and headed south along the coast. It was beautiful, fun, and very last minute. On Sunday we picked up the dog from my sister, visited Steve's dad and putzed around the house. We were worn out and relaxed from our mini adventure.

I made a quick dinner and we watched "60 minutes" while we ate in front of the television. It was likely a repeat, but neither of us had seen it before. The first story was about Syria, people trying to get out and people stuck inside on the wrong side of the political powers. It was heart wrenching. People lucky enough to make it across the border were seen putting their children onto trucks for what they knew had to be better circumstances. You are in a terrible predicament when sending your children away to an unknown fate is better than the hell you are experiencing.  And those were the lucky ones. Those who cannot get out of Syria but are not in a favored group are starving to death. My mood and appetite quickly changed.  We watched the footage in silence, feeling guilty for all the excesses we enjoy on a daily basis.

Then the camera focused on a little girl in her dad's arms. I would guess she was 6 or 7, but it is difficult to know. She was so small and so gaunt and weak she looked much younger.  She was just a shell in her dad's arms. The reporter said the footage was from January 2014 and that little girl died of starvation a few weeks later. I had to leave my dinner and walk away from the television.

My first thought: That child died right around the same time Maggie did (2/15/14). Then I thought about these two lives and how very unfair everything is.  I don't know a thing about that beautiful little Syrian girl except that she starved to death. But I am going to assume she was an otherwise healthy child and I can surmise she did nothing to deserve her fate. How could she possibly have done anything? She was just a little girl. She never got a chance. She was born in the wrong place or to parents of the wrong political views or both.

Maggie, who was born with a myriad of physical issues and disabilities got every chance. Maggie, who many people pitied, had a wonderful life. It was a life of challenges, certainly; but if we measure life in smiles and laughter, there was no one richer.  And even those who pitied her didn't do so for long because if they took even a moment to get to know her, she shared her light with everyone.  She elicited as much laughter and as many smiles as she gave. Thinking of her always makes me smile, even when I miss her so terribly.

As troubling as that story was, and the image of that little girl stayed with me causing a sleepless night, it made me appreciate my life and Maggie's a little more than I already do.  If Maggie had been born in Syria - or in any number of other places in the world - she would never have survived. She would never have had a chance to survive and share her light. Instead she was born in a place with a government that cares for its people, with access to world class medical care, into a family that could care for her. All the stars lined up for Maggie to thrive, and thrive she did.

I'm grateful for that, I really am. I only wish she could have thrived longer. If that makes me selfish, so be it.

I'm not naive. I know there are people who starve here too, and I know there are innocent children lost to all sorts of horrible situations that some would blame on government action or inaction. But we are free to criticize and try to make changes. We have a free press that does that for us all the time. ALL. THE. TIME. And we take it for granted or even complain about it.

I am grateful for the chances we get, even if they don't always work out.  I hope there is a Heaven and that Maggie and that little Syrian girl entered together hand in hand and that they are both happy and at peace.  I wish there could be peace on Earth too, and that little girls everywhere could get just a chance to thrive.

And maybe not have to have such sad stories.