It's Thanksgiving week. Everything is so busy. The table has been extended, the supplies laid in, last minute grocery runs planned. That should be everything. But not this year. That doesn't even begin to scratch the surface of what is going on around here. 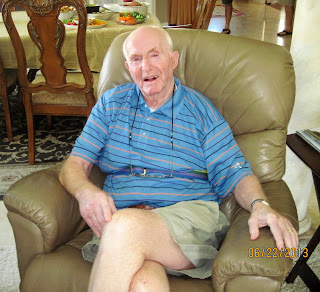 Thanksgiving will be bittersweet for us this year.  Steve's dad, Ed McDonald, passed away quietly late Sunday night. He has been in failing health for quite a while now. He was living here - in Maggie's room - for the past four months since he went into hospice. He needed round the clock care which he lovingly received from two caregivers. He was comfortable and pain free while he was here and I am glad for that.

When he entered hospice he was assigned a nurse. They told me the nurse was also a Catholic nun and I thought that was perfect because Ed has always been a devout Catholic. The woman was great, no nonsense, down to earth. I could not believe it when she told me her name was Sister MAGGIE. In all my years in Catholic school for me and my boys, I never met a nun named Maggie. There were Sister Margarets, but no one ever used the nickname. That was such a strange coincidence, but one I decided was a good sign. So there was Ed in Maggie's room, which is perfectly set up to care for someone, being supervised by Sister Maggie.  Everything felt right.

We knew he was declining but still the end was something of a surprise. I suppose that is always true. No matter how expected, there is a moment when life ends, and it is so unbelievable when that moment actually happens. Steve's siblings were both here earlier on Sunday, which was great. In fact, that may be what he was waiting for - to see all three of them together. I know he gave them a weak smile when he realized they were all there.

Let's face it, I pretty much hit the jackpot in the father in law department. He and I had a great relationship always, but especially in the past three years since he came to live in San Francisco. I became his main lifeline when he was in assisted living and then in skilled nursing and finally here at our house. We spent a lot of time together and I loved every minute of it. He was so accepting of his circumstances. He had Parkinson's and could no longer live on his own. He didn't want to go into assisted living, he didn't want to leave his home or his town or his church, but he accepted that was how it had to be and he never complained. He had so much grace.

I first met Ed 33 years ago when I started dating Steve. I can honestly say in all that time I never once heard him raise his voice or have a cross word for anyone. This is not to say that Ed was quiet and reserved, because that's not true either. In his day, he was warm and generous host, he ran local campaigns, he ran everything at their church, he loved to hunt and fish and was a scratch golfer. And he loved his family more than anything. Ed retired from the phone company when he was 51 and enjoyed his life even more after that. That was back when I first knew him and for a couple of years after his retirement his watch would still alarm at 4:30PM which was the time his workday at the phone company ended. It was a daily reminder of how happy he was.  He would smile and turn it off saying "Poor Bastards are still working." It was hilarious.

I remember when Eddie was born - the first grandchild on that side. We had a different name picked out and had shared that with others. Exercising my prerogative as a pregnant woman, I changed my mind about a week before Eddie arrived. Steve and I decided on Eddie but never had the chance to tell anyone because he unexpectedly arrived early. I didn't get to see his face, but my mother in law later told me that Ed drew in a breath and his mouth went into a perfect circle when he heard his first grandson would have his na me. It was a good choice.

So in addition to the Thanksgiving prep, we are planning a funeral for next Monday. I am glad he is at peace and I am glad he and his bride, Branca, are back together again.

He was a wonderful man, a wonderful father and father in law and a fantastic grandfather. In this week of Thanksgiving, I am thankful I was part of his family.  I will really miss him. 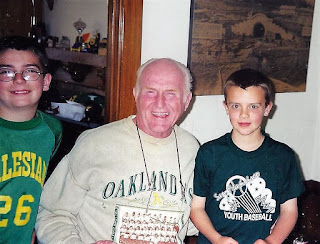 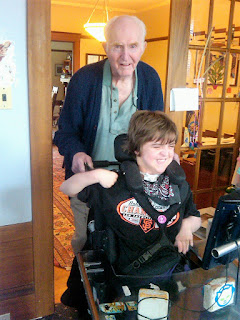 I give you grief.

Like half of America (plus 200,000) I am not happy that Donald Trump was elected President.  As election night progressed and his victory looked inevitable, I had to go lie down in the dark. For the 24 hours after I refused to look at any media, missed speeches and insights because I just couldn't handle it. My husband was a little worried about me because I would only watch the Hallmark Channel.

Then on Thursday, I got up and faced the new America. I am still not happy, but I am an American and this is my country. I will not change my attitude toward the civil rights of my fellow Americans, those who immigrate to this country, or the environment because of the person in power. In fact that will only steel my resolve.  It is a call to action.

I am now seeing articles describing the "grief" of many Americans about this election. I recognize I had a strong emotional reaction to this election, but I bristle at the use of the word "grief" to describe it. Grief is different, grief permeates and eats away at you. Grief is lonely. Grief is powerless.

Though I have been living with grief for the past 33 months, and have tried to define it through my writing and thinking and any other way I could,  I realized I never really looked up the word. Here is the dictionary definition:


So to those of you "grieving," you have my sympathy. I sincerely hope this is the worst sorrow you ever experience.

Just remember, you are not powerless. You have the power to change this. It might take four years, but you have power.

Those who are grieving after a death cannot do anything to change the situation. If there was anything we could DO we would, but it is impossible. We are helpless to change the outcome. We can work through our grief and hopefully come out the other side, but we cannot bring back our loved ones.

Unlike the loss that comes from a death, however, you are not helpless. You can DO something about this. If you don't want a Trump president DO something. Work for change and maybe, just maybe, LISTEN and try to understand those who voted for Trump, because they were clearly ignored for far too long. They are not all racists and misogynists, and name calling will not effect the change you want.

I've lived with grief for a long time now and if you want that word to describe this, it's all yours. I literally give you "grief."

Perhaps what we need a new word to describe the particular deep sorrow that follows a death, because I guarantee you, it is very different than this.

Donald Trump, who mocked the disabled and spewed a lot of horrible things about a lot of different groups of people, has been elected President of the United States of America.

I am deeply concerned about what the unexpected outcome of this election means for all Americans, and particularly the most vulnerable members of our society.

I miss Maggie every single day and wish she was still here.

Today I am relieved that I don't have to worry about her.

Thomas of the Richmond District

This is an addendum to a post I did last week about my neighbor Thomas who recently passed away. Here's the original post Maggie World: Thomas

Thomas was a lovely, sweet, homeless, mentally ill man who spread good cheer whenever her went. When news of his passing spread on the neighborhood blog there was an outpouring of stories of how Thomas had touched various people in the neighborhood. It was the internet at its most pure: no snark anywhere.

My friend Mark also lives in this neighborhood and told me there was a service planned at Star of the Sea church this evening. I made a point to go. I wondered as I approached the church if anyone would be there. I would not have been surprised to find 20 people there and that would have been lovely.

But I was wrong. I don't know why I underestimated my neighbors or the effect that Thomas had on them.  There were HUNDREDS of people there. The large church was full and there were people standing. 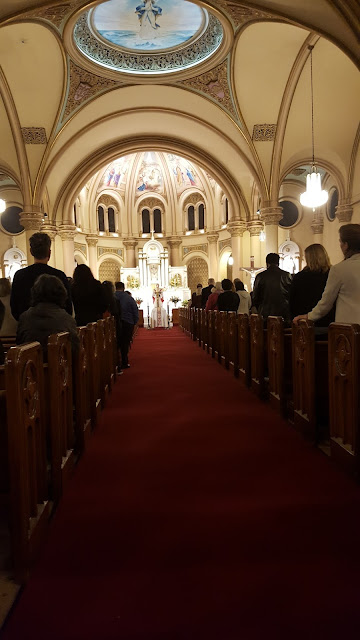 Folks brought food donations for the local food bank and donated to a collection to get Thomas a burial and headstone. He was a good man and a member of our community and we were there to take care of him. It was so heartwarming, especially on the eve of this very contentious election.

The priest talked about homelessness being the lack of a shelter, which was certainly true for Thomas, but he was not lacking a home. He was at home in our neighborhood under the trees. He was one of us.

After the mass I walked over to the reception with Mark and his wife Pat. Pat said that though she was impressed and moved by the turnout, she felt a little let down because she thought they had a special relationship with Thomas. I felt the exact same way.

The truth is, we did have a special relationship. Each of  us. All of us.

I feel very proud of my neighborhood. But in reality it was Thomas who did it. He was just the embodiment of goodness and shared it with us, his "family."  We were all richer for having known him.

Godspeed to a good man.
Posted by Maggie World at 9:46 PM 1 comment:

Today is Dia de los muertos or Day of the Dead. It is a part of the Mexican culture to honor those who have died. It is a national holiday in Mexico and it has become more popular here as well. You see these altars set up everywhere.

I just received pictures from Joe, one or Maggie's former teachers at Mission High. There is an altar there for the school community and he put up a picture of Maggie and one of Tyre and his mom Nadine, who have all passed away.

It made me so happy to know Maggie is gracing those halls once again. 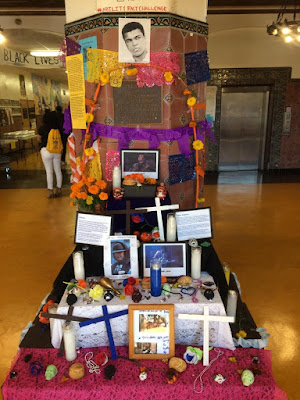 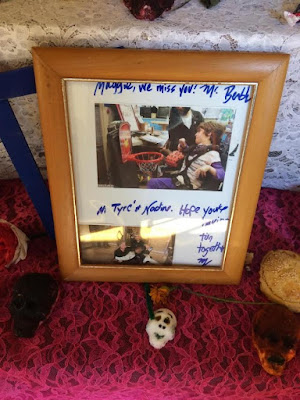 Posted by Maggie World at 1:44 PM No comments: