There was a Boy

Somehow another week slipped by. I have so many posts in my head, but for whatever reason, I am having a hard time getting them written and posted. It's not writer's block so much as it is writer's fatigue, or perhaps just laziness.

Fortunately, other writers are not suffering from the same malaise. Chris Gabbard has written a memoir about his son August who lived a life similar to Maggie's. August passed away at age 14 just a few months before Maggie. Chris, a college professor, wrote the book in a series of letter to his daughter, August's younger sister Clio, explaining all aspects of August's life.  It is basically a series of love letters to and about his children written by a college professor. Hence, it is both wonderfully personal and scholarly at the same time. The first chapter/letter is available on line. It gives an overview of the entire book and leaves us wanting to turn the page and read more. You can read the first chapter here:

.
Chris sent it to me the other day asking if I minded that Maggie was mentioned in the dedication.

Chris never met Maggie; in fact Chris and I never met until recently. I knew Chris' wife Ilene when August was little and they lived in San Francisco, but I never met Chris until last summer. I have corresponded with him for a few years now because of our similar circumstances. (You may remember posts about his earlier article A Life Beyond Reason, Maggie World: A life Beyond Reason)

Though no two experiences are the same, I know from my own life how very honest and true this memoir is.  There were parts that made me teary and parts where I was vigorously nodding my head as I read.  The part about weary parents being pulled into the disability rights movement was especially powerful to me:

The point is not that medicine should stop trying to save people. Rather, the point is that society has to rethink what it means to be dependent. Because your brother’s situation made this relatively new, society-wide development apparent to us, your mother and I embraced a political struggle we had never thought much about or wanted to join, namely, the disability rights movement. We had no choice. When we went home from Loma Prieta with a significantly impaired baby, we had little idea what lay before us. We wondered if our son would live, and, if he did, how he would get by, and we of course wondered as well how our family would cope. Looking for assurance and a place of comfort, we found that the campaigners for disability rights never questioned whether your brother’s life was worth living. For them, it simply was. Because of this, we felt most at home among them. As a matter of necessity, their struggle became ours.

Chris Gabbard writes so very eloquently about all of the aspects of raising a child with disabilities. He takes the whole subject to a lofty new level.  And it inspires me to get back to writing.

Read the letter. It is long and delicious.

I really don't know why the first anniversary of Maggie's passing was such a big thing, but it was. As the day approached, the world seemed to get heavier and heavier. But it was made lighter by so many of you.

People are incredibly kind. We are very fortunate to have so much love and support in our lives. We've felt it not only this past year but always and again this week. We received so many cards and notes and texts and emails and calls and hugs this week. There were flowers delivered by a stranger, flowers left on my doorstep and flowers that arrived with visitors. Each gesture was a message telling us that Maggie is remembered and that people feel our loss. It really helps and I thank you all.

One friend happened over not knowing what day it was. He saw the flowers in my hand and asked the occasion. I told him and his eyes filled with tears. He said, "We all have our things. Everybody has something. But yours is a big one." And he gave me a tight hug. It was lovely.

We do all have our things.

And I thank you all for helping us with ours. 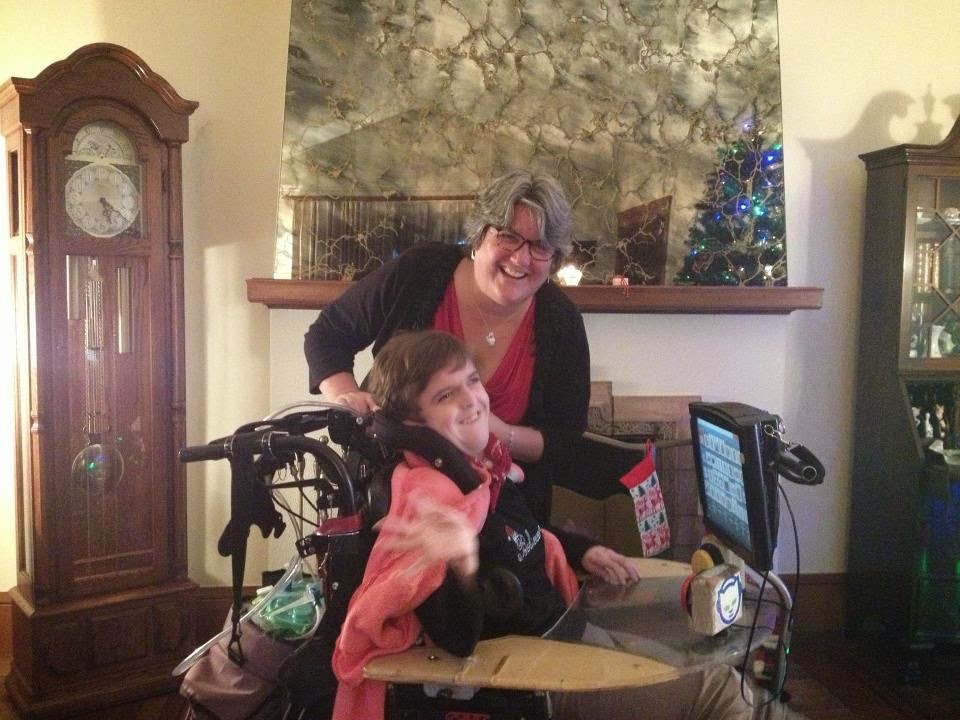 Posted by Maggie World at 8:19 AM No comments: 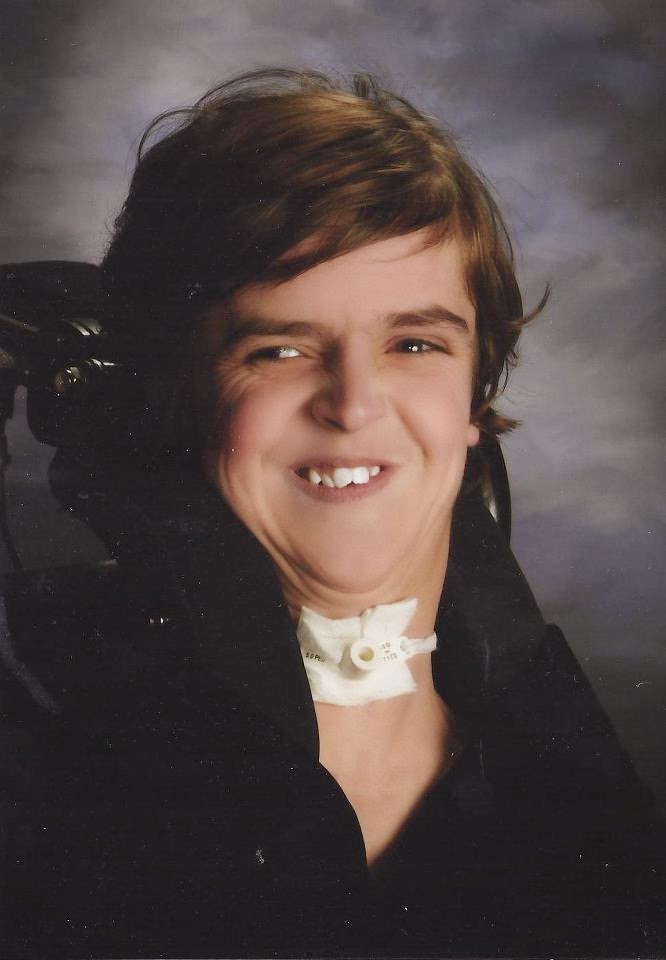 So now it's been a year. A year is significant. We've gone through everything once. Not sure why anyone thinks that makes things easier, but we have survived an entire year. Though we are cocooning a bit, we thank you for the calls, texts, notes, and everything. So many of you - both friends and strangers - have been with us every step of this journey. It really helps, even if we don't tell you often enough

I know in many cultures there are rituals and significance to the one year anniversary of a death. None of those apply to me, but I cannot deny the significance of this day.

Something that has been of great comfort to all of us in the past year is the way Maggie lived her life. She lived every minute of her almost 20 years on this Earth. We have focused on that and laugh remembering her antics. She was the brightest light in all of our lives.

Today is different. Today it's all about when that light went out. It was the hardest 36 hours of our lives. But of course it didn't go out completely. Even as we were there with her in the ICU there was laughter and light. Maggie had too much vivacity to have her light extinguished. 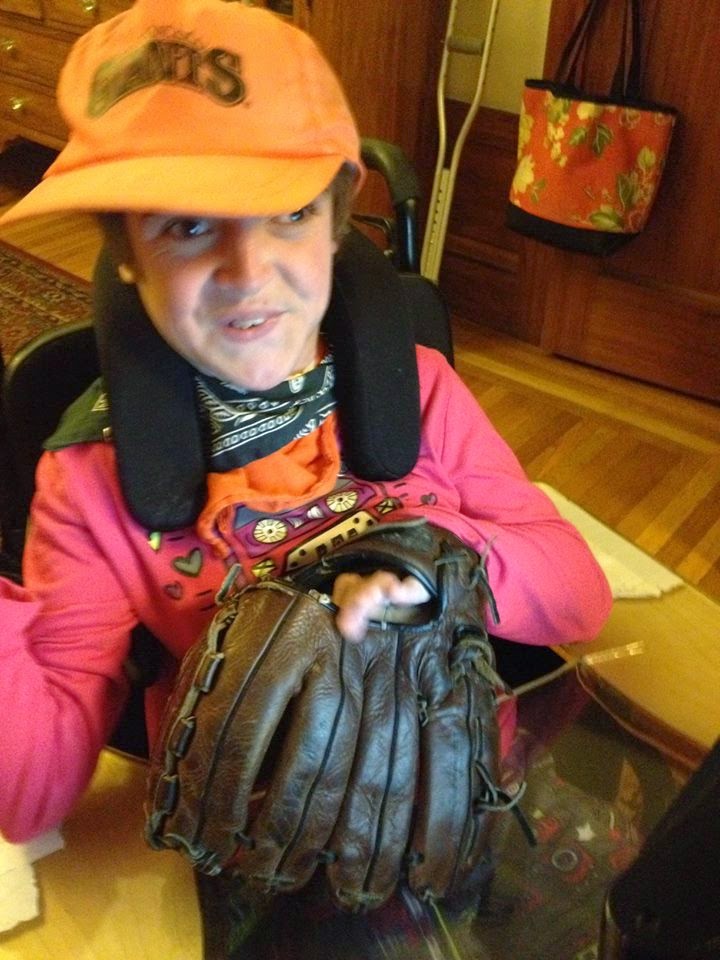 Oh! do we ever miss her.

Thanks for all the feedback yesterday. I received calls and texts and emails. I guess I really made folks sad with my Valentines tale of woe.  So today I want to share something more positive.

I had lunch with a friend yesterday who is also a parent of a child with special needs.  We talked about full inclusion at the schools and how beneficial it is not only to the child who is in special ed, but to the rest of the class. Everyone learns that there are all types of people in the world.  As these children enter the work force (which is happening now), they are better equipped to deal with disabled people because it is normal for them. It used to be the disabled were out of sight, but now they are part of the community, part of the classroom. That will go a long way toward erasing some of the disability bias that exists in the world.  It's slow, mind you. It takes a generation or more, but we are on our way.

Maggie was not in a full inclusion classroom, she was always in a special day class.  Her learning style was too complicated for full inclusion  (That was my choice, not something forced on Maggie or me.) I know other kids with comparable disabilities who do fine included in a regular classroom, but we felt Maggie would maximize her potential in a a special day class -- and she did. Maggie used her inclusion time for social purposes. The girl was the most social person ever and she was included with other kids for non academic activities such as field trips to the pumpkin patch in the first picture or wherever she was going all dolled up in the second picture. Every kid knew Maggie in every school she attended, so I guess she did something right. 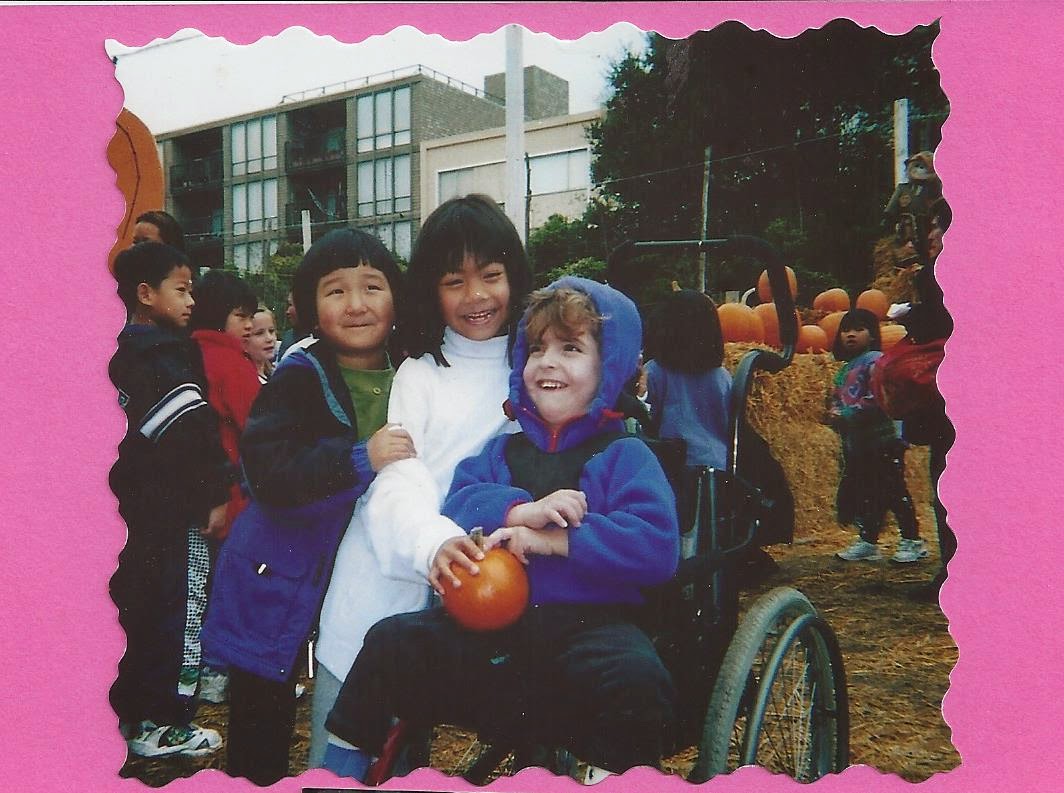 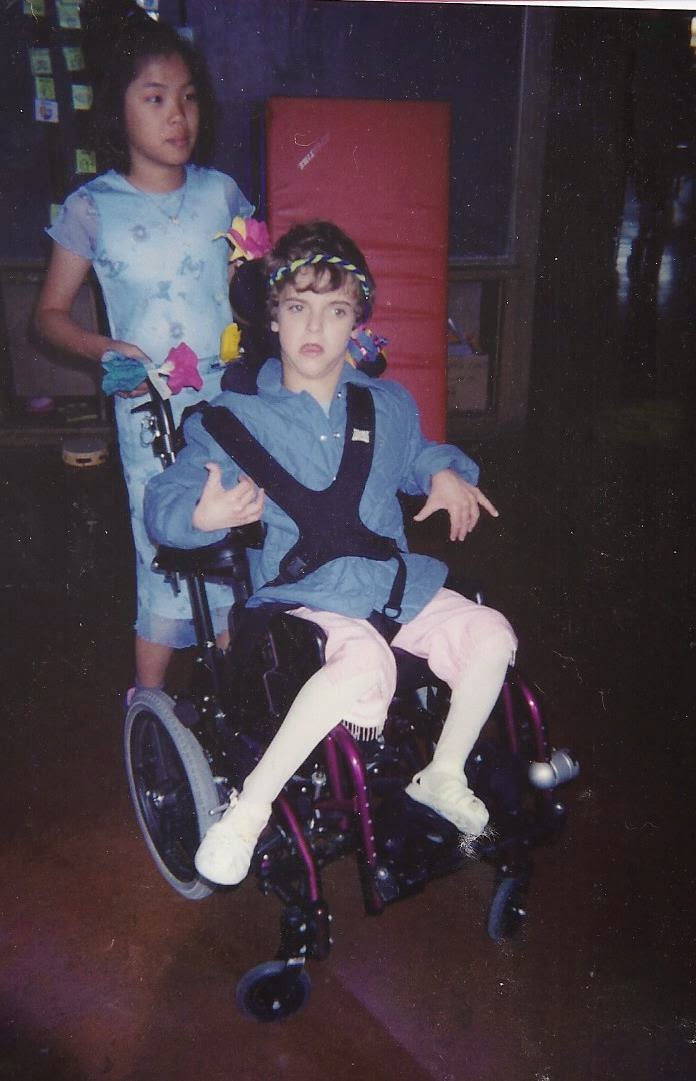 I specifically chose pictures from Maggie's early school years because I remember two incidents from her elementary school days that demonstrated her place in the school and the other kids absolute acceptance of Maggie. A mom heard the kids greeting Maggie and said, "is this Maggie?"  When I confirmed it she told me her daughter kept talking about her friend Maggie and asked if she could invite Maggie over. The child never even mentioned that Maggie was in a wheelchair. The mom was delighted and so was I.

The second incident took place one day when we arrived at school late, probably because of a doctor appointment or something. It was recess time and all the kids were out on the schoolyard. They could see us unloading the van through the chain link fence.  Our van had recently been adapted for Maggie.  I  lowered the lift and moved in to unlock the chair. The dog jumped out and started sniffing around as I positioned the chair onto the lift. Kids had gathered around the fence watching us intently and I heard them gasping and oohing and ahhing. They were just little kids, maybe second or third grade; but I distinctly remember thinking "Really? Even here at school?"  That was just for a second, though, because immediately one of them said, "Maggie is so LUCKY! She has a DOG!"

The dog set her apart.
Not the chair.
Not the talker.
The dog.

Those kids are in their 20's now. They are probably finishing school or out working in the world. They are or will be making the rules soon. That's a good thing.

I hope they all got dogs.

Be still my heart... 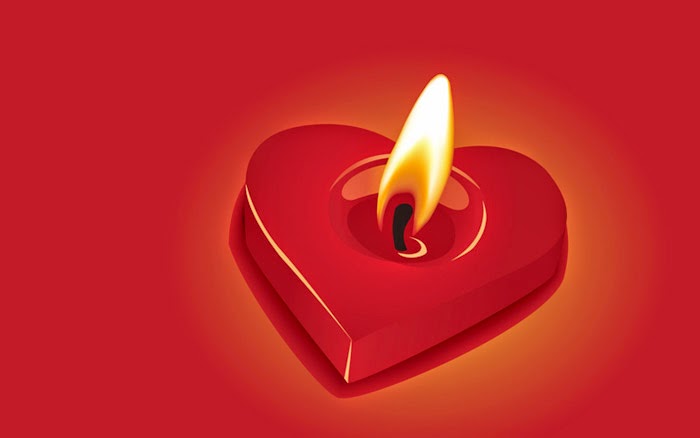 Valentine's Day is fast approaching. I see the pink and red hearts everywhere and it makes me so sad.

Early last Valentine's morning was the day of Maggie's catastrophic event when she stopped breathing and her heart stopped. She never regained consciousness and died the next evening. But Valentine's Day is the day we lost her.

Valentine's Day. A day set aside for love.  I suppose it all makes sense in some macabre way.  Everybody loved Maggie and Maggie loved them right back. She owned any room she entered because people were drawn to her exuberant joy and her obvious love of life.

But the day will be hard for us. I am back there over and over again every time I see the garish decorations - the ones Maggie loved. 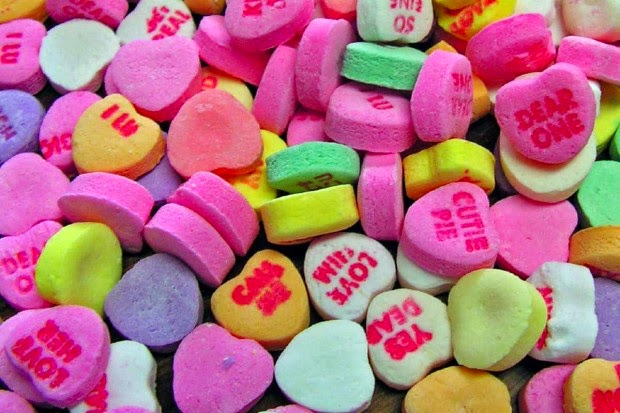 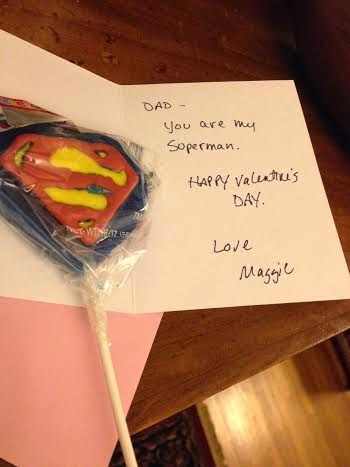 We had Valentines all prepared for school. Those chocolate hearts wrapped in red foil from Sees Candies were for all the adults and the little boxes of candy hearts for all the kids. The chocolate hearts are now in the freezer - but I know we will never eat them. The boxes of candy hearts with sayings like "Oh you kid" and "I love you" are up in the cabinet.

A card Maggie and I made for Steve sat on the sideboard in the dining room for months.  It just said "Dad, you're my Superman" and there was a superman sucker next to it. I don't know what happened to the sucker. Last time I saw it it looked very old and faded. The card we still have.

What does one do with things like this? They are so packed with meaning for us. They make us sad and remind us of the worst day of our lives. But we can't throw them away. Not yet anyway. Strange, isn't it?
Valentines is forever changed for me. We still celebrate love, but now it is a day to remember someone we loved so very very much. And miss so terribly. 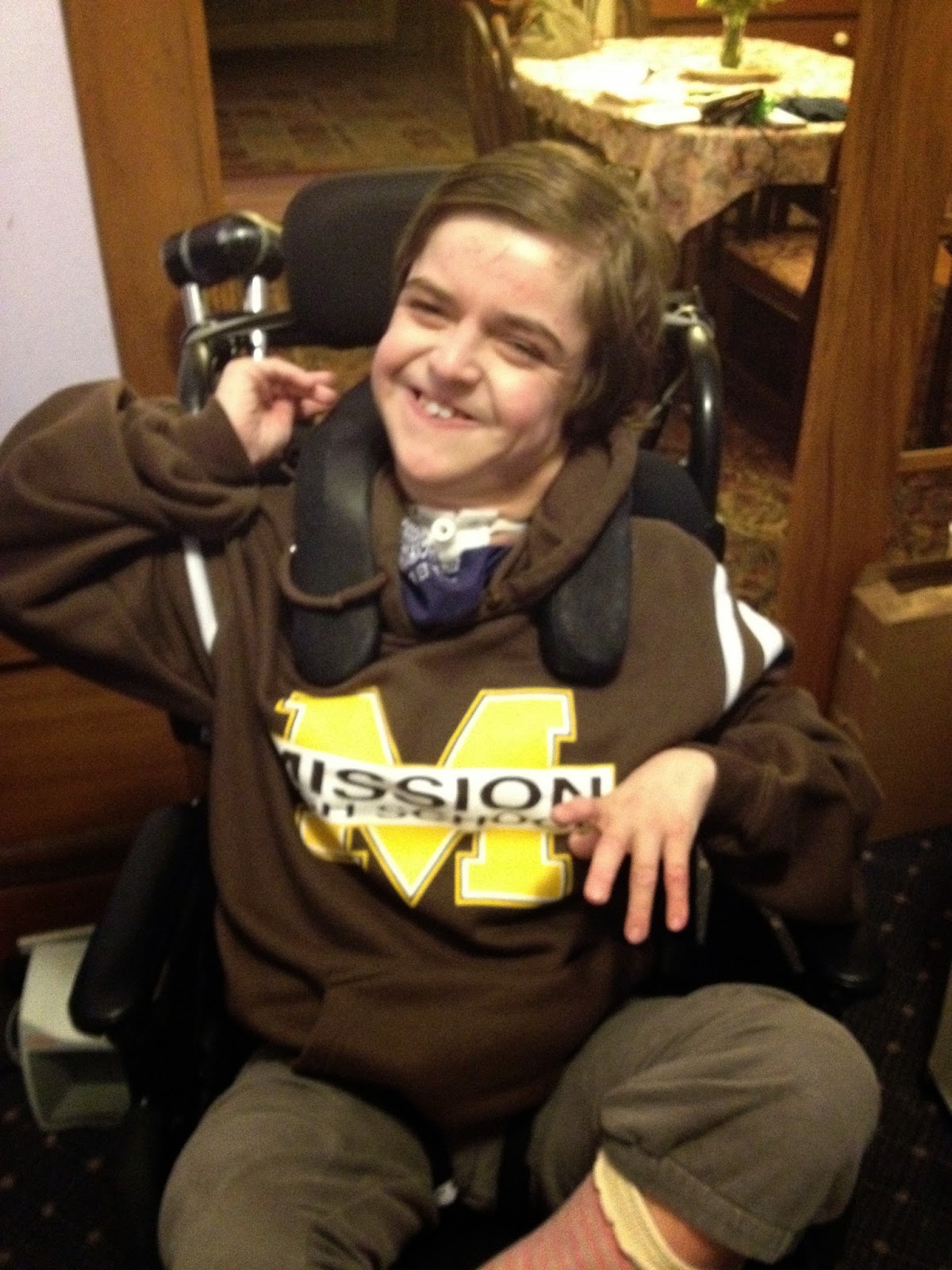