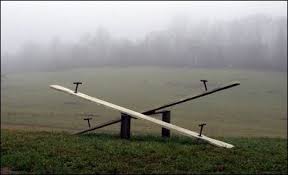 Only it doesn't always seem to work out that way.

When Maggie was here and I had to deal with insurance companies, doctors, agencies, medical suppliers, and more, I always felt that hassle of all that should be balanced by sparing me from the day to day annoyances of an average person. But that was not to be. I experienced just as many dead batteries and overflowing toilets as the next person.

Similarly when we lost Maggie, and suffered the worst grief imaginable, I figured we would be spared any more heartache. We had done far more than our share. Let someone else handle things for a while.

But that is not to be either.


Our friend Chris Matthissen died this week. He and Steve had been friends for years and years, dating back to college. He was in our wedding (30 years ago this Tuesday.) Chris was a wonderful guy and a great friend. When Maggie died he was here in a flash. And he helped us grieve, which is the most generous thing a person can do. He didn't tell us what to feel or dole out advice, he just helped us.

I remember the day after her funeral the three of us, Chris, Steve and I, took a walk to Tennessee Valley beach in Marin County. It was a brisk February day, and it was a perfect thing to do. It is about a mile from the parking lot to the beach. Steve and I were in shock, still numb from her sudden death and the ceremony the day before.  Chris respected that and kept quiet or talked at all the right times. When we arrived at the beach, the ocean was churning with energy. We all sat on the beach quietly for a while. I was watching the waves and the water and the energy and feeling a little better.  I didn't say anything, but Chris seemed to understand that. He said, "I love coming to the ocean, it's like it does all the work for you." It summed up my feeling perfectly. I think of that every time I go to the beach. And I always will.

Chris had always come to us because travelling was so difficult for us with Maggie. Finally, last September we went to see him in Seattle and had a great  time. We went to the same house in 1985 after we took the bar exam, but hadn't been back there since. (Chris was gone to South America for 10 years in there too. Another story.) The place was very different. Chris had created an oasis of gardens for himself.  His house stood in the middle of the lot and over the years he surrounded it with 360 degrees of different gardens. 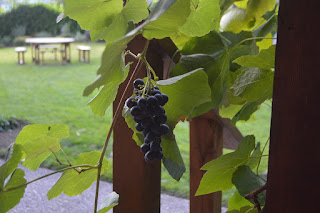 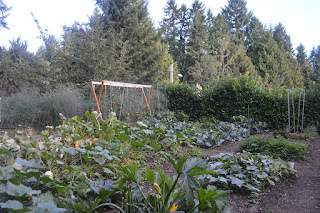 There was an English garden with flowers and lawn and benches, there was a fish pond and roses, and an enormous vegetable garden producing more food than he and his friends could ever possibly eat.

The last piece was a fantastic outdoor kitchen that Chris crafted completely on his own. 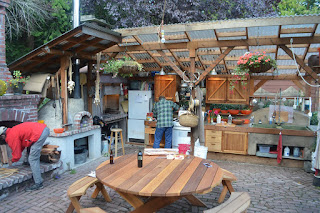 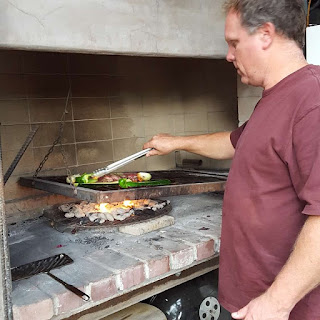 I would say that 75% of our time there was spent in that outdoor kitchen. He was a fantastic cook creating things in the kitchen he made from the food he grew. We stayed out there for hours. When it got cold he lit a fire in the outdoor fireplace. It was heavenly. 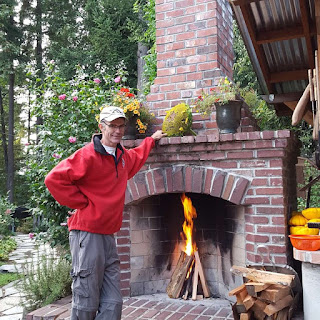 Chris did not have a wife or kids. He worried about getting old and not having anyone. I told him to come and live with us and we could all take care of each other. I meant it too. Other friends told him the same thing and they meant it too. He was that type of friend. You felt like he was part of your family and it was only right to grow old together.  Losing him feels like I've lost a family member.

I cannot truly grasp that Chris is gone. He was too full of life and love to leave. There is a hole in our world now that will take a long long time to fill.

Maybe the balance is out of whack right now. It's too soon and things are too raw. Maybe in time we will see that having him in our lives balanced out other things. I know in my heart it did, but the seesaw seems hopelessly tilted right now. We are just sitting on the ground with the other end up in the air waiting for something to balance things out. I don't know what it will be, but it will have to be something big.

Steve and I will head to Tennessee Valley Beach tomorrow. That ocean has a lot of work to do. 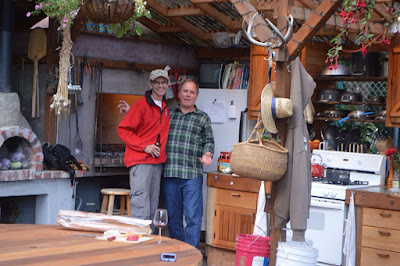 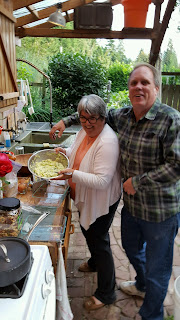 When I picked up the mail yesterday there were three letters for Maggie. Anything addressed to her is a bit of a shock to the system. Maggie didn't receive much mail when she was alive and well, so receiving something now, two years after her death is jarring.

I just brought them upstairs with the bills, solicitations etc, left all the mail on the cutting board and walked away. It really takes a minute to gather oneself in these weird situations.

After a bit I came back to go through it. 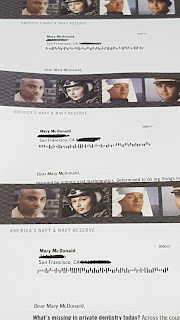 Maggie received not one, not two, but THREE letters from the United States Navy encouraging her to consider a career in the Navy upon graduation from college.  One very specifically suggested she become a Navy Dentist! She could fight decay on behalf of her country!

I'm certain the Navy needs college graduates and dentists and ever other type of accomplished young person. They also need to do just a tiny little bit of work on their mailing list. Sending three letters to anyone is a waste. Sending even one to a person who was never able to join the Navy and, more importantly, to one who died two years ago is stupid.

I'm not feeling terribly confident in our Navy right now.