Tuesday was 80 degrees in San Francisco. I was in the house almost the entire day. Wednesday the fog rolled in and it was about 50. I went down to the Bay to take a walk with my son Tim and the dog. Tim laughed when I told him I missed the beautiful weather and was out in the fog. He told me I was very San Franciscan. Maybe I am, but it would have been nice to actually SEE the Bay while we were walking.

We went to Crissy Field, which is a great walking spot and is dog friendly. Much of is it wheel chair friendly, so I go there with Maggie frequently. She was at school today so we went off the trail a bit. The Golden Gate Bridge towers over Crissy field and you feel like you are walking in a postcard. Not today, of course. It was so fogged in you could not even see the bridge. We headed in the direction away from the Bridge. When we hit the yacht club, I said, “Let’s go to Coghlan Beach.” We just looked at each other and grinned.

Coghlan Beach is a small sandy beach at the end of a spit of land that forms the outer edge of the harbor behind Marina Green in San Francisco. I am told that at high tide it disappears completely, but every time I have been there, it is visible. There are probably fewer than 300 people in the world that know it is called Coghlan Beach and 250 of those people are past and present bay swimmers. The rest are members of my family. Now all of you know too.

Coghlan Beach is (unofficially) named after my father, Frank Coghlan. (pictured) He was a very well respected bay swimmer. He belonged to the South End Rowing Club (www.south-end.org) for nearly 40 y 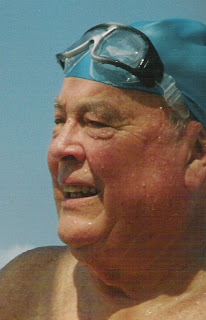 ears and swam in the San Francisco Bay almost every day until he was about 80. This includes over 50 swims in from Alcatraz and dozens of swims across the Golden Gate in the tricky and dangerous tides. You have to be a certain type of person to do that. Not just a strong swimmer (that goes without saying) but also an adventurer. A warm-blooded adventurer. Being a little crazy is also helpful.

The beach was named for him after he was pulled in there by the tides during a long swim. He was over a mile from his destination and had to be picked up by one of the pilots. It was so foggy that day he had no idea where he was – he could not see the entrance to the harbor only a few yards away. He stood there in his Speedos and bright orange cap until one of the rowers came to get him. That may be the only time he was every picked up by a pilot boat. He was a VERY strong swimmer and finished what he started.

Needless to say, he received a lot of good-natured ribbing from the other members of the club, especially those much younger than he was. They named the beach in his honor. Though it started out as something of a joke, the name stuck. Every year since then the South End holds the “Coghlan Beach” swim as one of its official swims. I checked the schedule and this year they did it twice, January 11 (brrrr) and the evening of June 5. My dad would have loved both, but especially the January swim.

He was very proud that this beach was named for him. Other than my mom and his family, the two things my father loved most were San Francisco and swimming in the bay. To have a piece of the city – especially a beach - named for him was the best possible honor. My sister Joan went out to Coghlan Beach and gathered some sand, put it in a baggie and brought it to him in the hospital just before he died in early 2007. That made him very happy. Remembering all of that today made me very happy too.

I wonder how we would go about making that name official. My husband has already made the sign and we are ready to go put it up – but it might be better left as it is.