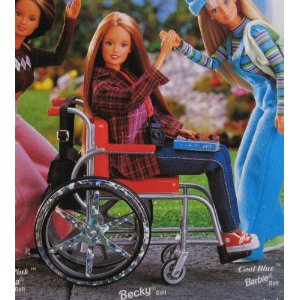 For reasons I cannot explain, I remembered this story today. Maggie was about 3. Mattel - the creator of Barbie came out with Barbie's friend "Becky" who used a wheelchair. It was sort of the "wheelchair Barbie", but it was NOT Barbie, per se. The perfect Barbie persona was unfettered by the stigma of disability.

Eddie was adamant that we had to buy that for Maggie. This was not a toy Maggie could enjoy then or now. It was sharp and angular and could hurt her. But Eddie, who was about 9 years old, was so insistent that she had to have it. He said Maggie was in a wheelchair and should have a doll that looked like her. He said he would pay for it himself and pulled out his (empty) wallet when we were in Toys R Us.. I just stared at him, floored. That was so sweet. I told him it wasn't necessary and I bought it for an incredibly inflated price.  I was so impressed with his thoughtfulness, the price didn't matter and  I forgot about the inappropriateness of the toy. I was proud of him; I figured the toy could sit on a shelf, a testament to her brother's concern for her.

As fate would have it, a couple of days after Becky joined our household, Maggie ended up in the hospital for an extended stay. The boys were shipped off to one of my sisters. (There were so many times I can't remember which sister stepped up when - but they all did). Maggie was in intensive care and Steve and I came home to sleep for a couple of hours. The house had been thoroughly cleaned just before Maggie got sick, and the boys were gone so it was still very neat when we came home. The only evidence that anyone lived there was the Becky toy in the middle of the living room.

I looked at it and started to laugh, despite the gravity of Maggie's illness. Becky the doll was tossed out of the wheelchair and was lying on the couch with her perfect hair hanging down across her face. Apparently, her wheelchair had been commandeered by the government. It was being used by one of Eddie's GI Joes, who had undoubtedly suffered an ugly injury relegating Becky to the couch.

It was one of those moments that pops into my head frequently. (In fact if I've written this before forgive me, I haven't slept in days) My pride in Eddie's generosity was not diminished in the least by this turn of events. He didn't plan this - it was just creative. But walking in and seeing this changed a very dark moment into a very light hearted one, for Steve and for me. In fact, just before writing this I started to tell Steve the story and he finished it for me. It affected both of us deeply and still cracks me up to remember.

Somehow I don't think the makers of the GI JOE guys would consider a wheelchair user. Too much reality for the buying public. But it could be a serious money maker.. At least they could be gentlemen and come and rescue Becky off the couch.