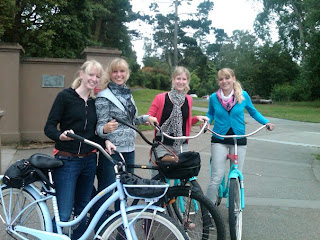 Steve took Maggie to the park and I'm supposed to be working on getting more things put away. I was doing just that when I received a call from Steve's cell. It wasn't him, though. It seems he dropped his phone in Golden Gate Park and four beautiful Swiss girls found it. They called the last missed call on it, which was from home. They told me where they were and I ran over to get it. I left the house so fast I didn't even think to bring a reward, but they would not hear of waiting for me to go get one. I told them the Swiss were heroes and they liked that quite a bit. Lovely young women and I am very grateful to them.

I'm sure Steve doesn't even know it's gone yet, because he would be completely freaked out and would have started retracing his steps immediately. It would be very very bad if he lost this phone, that's for sure.

Of course he will still have to answer to me for not picking up my call.

And I will insist on a reward.
Posted by Maggie World at 10:50 AM