Everybody over the age of about 15 years old can tell you what they were doing 12 years ago this morning. September 11, 2001 is seared into our hearts and minds. It changed our country and it changed us.

Last year there was another September 11 attack killing 4 Americans, but this time it happened in Benghazi, not New York and Washington DC and in the skies over Pennsylvania. There are far fewer of us who remember that day as clearly as we do 2001. But I am one of them because one of those four Americans was our friend Ambassador J. Christopher Stevens.

Chris and my husband Steve had been friends for over 30 years since their days as roommates in college. This picture is from October 2011 when Chris came over for dinner as he did whenever he was in the Bay Area. 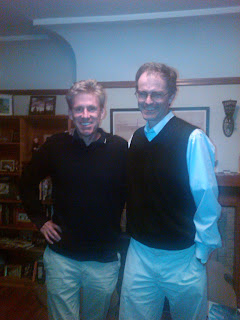 I went to a meeting that night and Steve called in the middle of the meeting saying something had happened in Benghazi. I told him not to worry because the Embassy is in Tripoli, not in Benghazi. I tried to concentrate on the meeting and then on the lecture I went to afterward. I apologized to my friend Mark for constantly checking my phone throughout the lecture, but I was desperate for information. There was nothing to know. Yet.

I came home and we watched the news. By then we knew there was one American dead, but we didn't know who it was. I searched Twitter and CNN and everything else I could get for breaking news. We rationalized that if the Ambassador were hurt or killed it would be all over the news and for some reason we took solace in that. I was sure he was OK, but before I went to bed I sent Chris an email because I knew at the very least, he had lost a member of his staff. I wished him well, told him we were worried  and asked him to check in when he had a minute. Of course, he never did.

I woke up early the next morning, maybe 5:30 or 6:00.  Steve was still asleep. I grabbed my kindle looking for news. It opened up to facebook and of course I was distracted. I saw a picture of Chris that someone posted and I smiled to myself. Chris had a facebook page but rarely if ever used it. It made me smile to see his picture there. I scrolled down and there was another picture. I didn't smile this time. The morning fog and distraction lifted and suddenly I knew why there were pictures of him.

My fears were confirmed instantly. I gasped and woke Steve who could tell that something was very  wrong. Steve is used to me waking him with some problem or another usually Maggie related. Those are graduated in terms of importance. Equipment malfunctions are one thing, but medical emergencies are another, He has learned to read my sense of urgency from his sleep and he knew this was bad. He turned to me and said "WHAT!?!?" I looked at him and said quietly, "It's Chris."

Steve was in complete disbelief and we looked at the kindle together as the television came on. We watched the reports in silence with wide eyes. We were hearing a major news story affecting all of America, and they were talking about our friend Chris. It was surreal.

We went about our day in a robotic fashion. I got Maggie off to school and Steve went to work. Within a couple of hours Steve was being interviewed by several different news outlets. It started local and went national by the end of the day. Steve said the weirdest was his interview with NBC nightly news. They asked him to come to the Moscone Center for the interview. NBC was already there covering the release of some new Iphone gadget. Everyone was all atwitter about that. Steve waited to be interviewed by the national news while listening to people go on about the newest toy. The disconnect was too much. 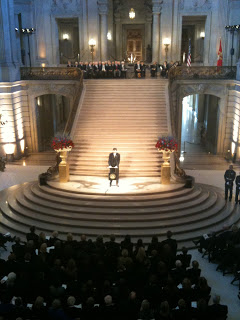 It took months for things to return to even a semblance of normal. Steve spoke at a memorial service at City Hall a
couple of months after Chris died. We were seated next to the Libyan Ambassador to the United States and met Senator Feinstein and former Secretary of State George Schultz and many other dignitaries. To say these are not our normal circles would be a gross understatement. We had to listen as the death of our friend became a political football in the national election and beyond. Well meaning acquaintances could not help but share with us their political spin on what happened parroting either FOX news or MSNBC, neither of which had any credibility for us. For us it wasn't political, it was personal.

Eventually, though, things calmed down and we could just grieve about losing Chris. But grieving wasn't enough. Steve needed to DO something.

Since then, Steve has worked with Chris' family finding ways to continue Chris' legacy of "people first" diplomacy. Steve and Austin, another of Chris's close friends, raised funds, rallied current and former fraternity brothers from Berkeley to contribute to the effort and to carry on Chris' good work.

Maybe we can't all be Ambassadors, but we can all try to understand one another a little better. Wouldn't the world be a better place if more people acted like Chris Stevens? Indeed it would.

Now a year later, we still miss Chris. We are still devastated by what happened. But we are looking forward. Programs are being put into place to continue his work with improving relations with the Middle East using student exchanges. The State Department has a program, the John Christopher Stevens Fund is developing programs and we are doing the same thing. The next Chris Stevens is out there, and these programs will help find him or her and nurture the interest and  natural talent they have to make a difference in the world.

Today Steve and Austin were interviewed by Channel 5 again and they both had big smiles remembering Chris. It's hard not to. He was the most positive person in the world. The interview is here: http://sanfrancisco.cbslocal.com/video/9294271-bay-area-friends-remember-ambassador-chris-stevens/

If you want to know more about Chris I suggest you check out www.rememberingchrisstevens.com to see posts from relatives and friends from all over the world as well as from admirers who never met him.


For Chris Stevens, Sean Smith, Glen Doherty and Tyrone Woods, killed in Benghazi last year and for the 3,000 killed in America in 2001: we honor you all. You are not forgotten.

Email ThisBlogThis!Share to TwitterShare to FacebookShare to Pinterest
Labels: 9/11, chris