There's nothing like that somber phone call telling you someone you know has passed away. The only thing worse is to get it two days in a row. It's been a very tough week in Maggie's world.

Yesterday I heard about Nadine. She was Tyre's mom and she and Maggie were fast friends. Nadine always called Maggie the Single Girl, because Maggie would go nuts whenever that Beyonce song was played (and it was played A LOT). Nadine was a force of nature. I met her shortly after Maggie was born. Everybody knew her. She was completely devoted to Tyre and all his friends and threw the very best parties. I last saw her in October when she had a celebration of Tyre's life on the anniversary of his passing. She had gifts for every single person there and announced them in an academy awards style. I believe I tied for Mom of best female friend of Tyre. She gave me a red scarf and I'm gong to wear it today in her honor. It's only right, Nadine was always dressed to the nines. I like to think she and Tyre are together again. They were as close as two people can be, and while her two other kids and grand kids have my total sympathy, there is something about Nadine and Tyre together that feels like it's going to be ok.

Here she is at Maggie's Mardi Gras Party wearing a Maggie mask and at the hospital when we went to visit Tyre who was stuck in there on prom night. 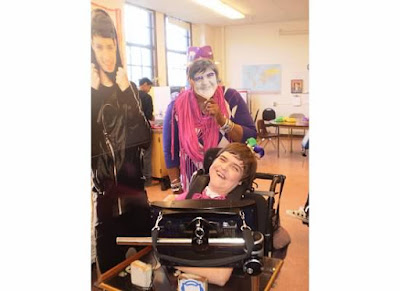 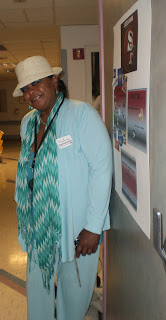 And then this morning another call. This time it was Robert. Robert was one of Maggie's classmates from Junior High through High school and those transition years beyond. They had a ton of fun together and loved to cause trouble. That would make everybody laugh, even the teachers who tried to maintain order. Robert was a charmer and loved to laugh with the rest of the kids. My heart is breaking for his parents and brother Tony. 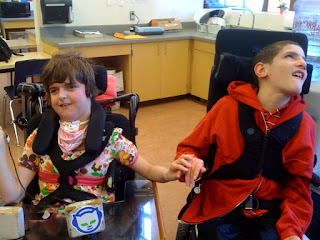 This is the hardest part about Maggie's World. So many have shorter lives than they should. Of course that's why their lives shine so bright - they're like comets streaking through life. But those of us who are just mere stars in the sky certainly miss their brightness when they're gone.

I have a feeling there is quite a reunion of the Aptos Middle School and Mission High school Italc class. Maggie and Tyre were there to greet Nadine and Robert. Nadine already has the party started.
Posted by Maggie World at 10:54 AM