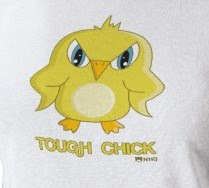 you, but tougher than she usually looks. In case you haven’t figured it out yet, Maggie is one tough chick.

Last Friday Maggie finally got her flu shots. It was October 30 and she went into the doctor’s office in her pirate outfit. I did have to remove the pirate ship from the outside of her chair, though. My van can fit her wheelchair, but alas, mateys , no room for the good ship.

We were scheduled to go in a week earlier, but Maggie was having some respiratory problems and we had to delay getting the shots. On Friday there were some squirrely symptoms in the morning, but we decided to go for it. It’s a balancing act, trying to figure out when she’s healthy enough to get the shots. Of course I don’t want her to get sick, but I don’t want to miss the window for the flu shot either. It was worth the chance on Friday because I could keep a close eye on her all weekend.

The flu clinic is upstairs, but we cannot get up there with the wheelchair, so they were going to do it in the office. The doctor told me to have the person come out to the car so Maggie would not be exposed to all the sick kids in her office. That would have been great, but the parking lot was jammed and we could not get close. We ducked inside and she received the inoculations in the hallway.

The H1N1 was a nasal spray and that just shocked Maggie. She looked insulted when not one, but two nostrils were infiltrated. Before she even recovered from that, the seasonal flu vaccine was being injected into her arm. Maggie quickly drew in a breath when the needle hit. I waited for the tears or sad face or something, but it was just the opposite. By the time the needle was out Maggie was laughing her head off. The medial assistant, a passing doctor and I all started laughing at her. There she was, dressed as a pirate, with the tattoo on her cheek laughing at the pain. It was as though she was saying “Really? Is that all you got”
Maggie’s attitude is so much tougher than her body.

I am thankful for that attitude because it is probably a huge reason she has survived all the surgeries and illnesses over the years. Besides, it’s very entertaining to watch people when the little girl in the wheelchair surprises them with her strength or sense otf humor or intelligence or whatever.
Posted by Maggie World at 9:28 AM