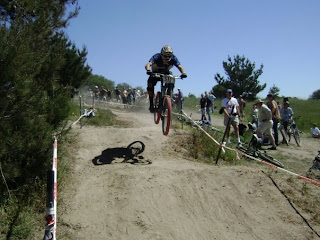 Maggie had a surprise visitor yesterday - in fact we all did. Eddie came home!! He was in Oregon at a bike race and stopped here on his way to Monterey for the big Sea Otter Classic race.(That picture is Eddie racing at Sea Otter last year.)  It's funny, he's been competing in races like this for years, and now he goes as a representative of Felt Bicycles. I still shake my head at the rapid fire changes in his life.

Eddie told me it was possible that he would come through SF,  but I never knew for sure when it might happen and I suppose just put it out of my mind.  So I was surprised when he called Sunday afternoon and and said he was en route. I told Maggie and she started waving her arms like crazy and saying "Eddie come see Maggie' on her talker. She hasn't seen him since Christmas and was very excited..

Unfortunately he arrived at midnight on Sunday and she was sound asleep. She leaves for school at 7AM and he was snoozing. She had to wait until she arrived home from school on Monday afternoon to see him. He was working from the house. Maggie was coming into the garage when Eddie came bounding down the stairs to greet her. Her hand shot out like a rocket and she grinned from ear to ear.  It was a very heartwarming moment.

When we got her upstairs (via the very slow elevator) Eddie was waiting for her and she did the whole greeting again.  Maggie lives totally in the moment and when it's a good one, she will relive it over and over again. I wish I had that ability.

Eddie is leaving this morning, but he got up before 7 so he could say good bye to her. Her big smile faded as he said he had to go back today, but she's pretty happy she got her Eddie fix. 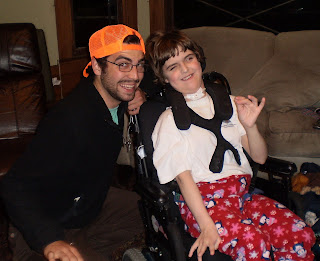 Email ThisBlogThis!Share to TwitterShare to FacebookShare to Pinterest
Labels: eddie