There was a party on Friday afternoon in Maggie’s classroom and I was invited. It was Juan’s 18th birthday. Juan is Maggie’s “boyfriend.” He has significant disabilities himself, but he uses what he has to his advantage. He is the only one in the class who can walk, so he is able to position himself next to Maggie all the time.

Juan is unable to speak and uses a dynavox as well. He does not need the buttons like Maggie does, but just uses the communication device directly. When Maggie wants to talk, she hits one switch to move the “cursor” to the thing she wants to say and, once there, uses the other switch to actually say it. When Maggie gets going, she can fly through the screens and selections to say exactly what she wants. When she is not in the mood, she just sits there smiling as if to say, “You know what I want, just do it.” Juan will have none of that. He takes her hand and hits the button with it as if to say, “C’mon, get with it.” Maggie responds to him.

Maggie did not need any prompting on Friday, though. I programmed her talker so that she could say "Happy Birthday Juan" in spanish, which is the language Juan's family speaks at home. It's simply Feliz Cumpleanos. However, that took a while becaue the dynavox doesn't recognize spanish words and I had to spell them phonetically. I believe I entered it "Felleez coompleeaanyos." He loved the message and so did his mom. (Maggie's making points with the mother.)

There are six kids in Maggie’s class and I assumed the party would be those students, the adults in the class and a couple of parents. I arranged my day to get to Juan’s party at 1:00PM, just as it was beginning. Or so I thought. When I arrived at 1:05, there were at least 25 people in the room. Juan made invitations on the computer in the classroom the day before and went all over the school distributing them. Even the principal stopped by. It was a happy group of people. 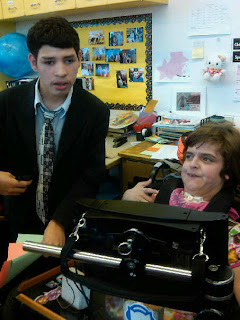 Juan was decked out in a suit and tie, and he looked marvelous. He greeted each person, including me, with a big hug. When the noise became too much for him he put on his headphones for a few minutes until he was ready to deal with it again. He is a man who knows how to handle himself.

I did get one picture of Maggie and Juan with my phone. However, I missed the best part. I received an important call and stepped out of the room for a minute. While I was gone, Juan was dancing with Maggie, holding her hand and twirling her around in the wheelchair. The teacher and nurse were looking for me, but I was in the hallway. Of course, it happens the minute I step out.


Then again, maybe it is no coincidence. Juan saw the old lady was gone and made his move.