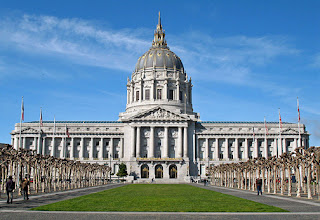 Mom Camp2.0 began last Friday because summer school ended last Thursday. Once again, it is my mission to entertain Ms. Maggie outside of the house every day.  We went shopping on Friday, went to Golden Gate Park on Saturday, walked with Grandma on Sunday and spent yesterday at Mountain lake Park.  I suggested numerous things to Maggie this morning and she was not interested in any. Museum? NO! Zoo? NO! shopping? NO!  Fisherman’s’Wharf? NO! Then I said, DO you want to go to City Hall and find out if Ed Lee is going to run for mayor? Yes!
Maggie is very civic minded. 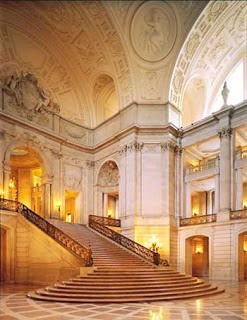 San Francisco City Hall is a fantastic building. If you are local make it a point to go in there periodically. It is extremely beautiful and full of life, and today was no exception.  There were groups of people milling about, couples getting married and city officials running about. We went in to the Board of Supervisors Transportation committee meeting. It was cool to see the formal meeting taking place in the impressive chamber. It wasn’t exactly exciting, though. We stayed near the door,  I didn’t think Maggie would last very long. That meant we were right in front of the speakers. Every noise was so loud that Maggie kept jumping. I figured we better high tail it out of there before she freaked out.
We walked over to the Mayor’s office. (We did not see Mayor Lee to get the definitive answer on whether he will run in November.)There were lots of people milling about. One group in particular was about 30 strong. They were all large men, I believe from some sort of labor union. They were very polite, in fact several greeted Maggie enthusiastically. That made me smile.  Suddenly as we were standing right there with them, their leader huddled everyone together and said,  “Who are we?”  Those 30 men started exercising their right to free speech right there and then in unison and at the top of their lungs. It was some sort of demonstration and we were right in the middle of it.  Everything was friendly, quiet and orderly and suddenly they were shouting some sort of chant in unison.  Maggie and I both jumped about a mile.
The elevator door opened and I quickly pushed Maggie inside. She was really frightened and trying hard not to cry. A man in the elevator asked what floor and I said “anywhere but here.” I comforted Maggie and told him that the sudden yelling had frightened her. He said, “Hey, it scared me and I was upstairs.” For some reason that made Maggie laugh.
So the civics lesson today was very thorough. We enjoyed the beauty of the showplace, saw the pageantry and formality of the committee meeting but had to admit it was boring and then were treated to a front row seat at a free speech demonstration. Mom camp can be very educational. 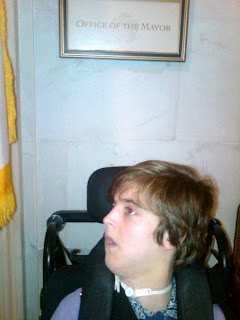 Now Maggie is contemplating a run for mayor.
Posted by Maggie World at 5:39 PM